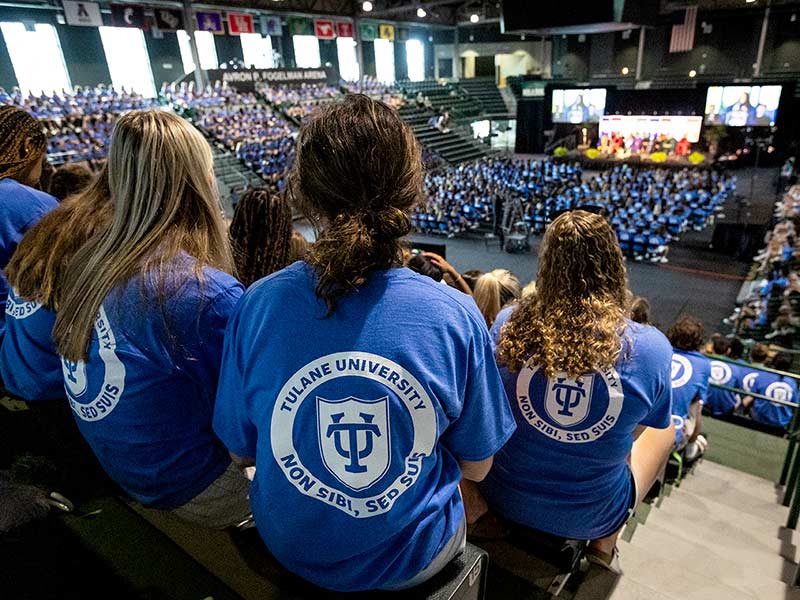 The President's Convocation for New Students is a ceremonial welcome for the newest class and marks the beginning of their time at Tulane. This year’s convocation was held on Thursday, Aug. 18, in the Avron B. Fogelman Arena in Devlin Fieldhouse. President Fitts used an umbrella as a metaphor in his address to the class saying, “Umbrellas — and minds — work best when they are open.” (Photo by Rusty Costanza)

Excitement, a little rain and a lot of Tulane spirit greeted Tulane's newest students at this year’s President’s Convocation for New Students. The event is the annual ceremonial welcome for the newest students and marks the beginning of their academic journey. This year’s Convocation was held on Thursday, Aug. 18, in the Avron B. Fogelman Arena in Devlin Fieldhouse.

Members of the Tulane University Marching Band and student singers performed the Tulane Alma Mater during the colorful procession of the gonfalons, which were carried by students and represent the schools of the university. Dr. Michael White and the Original Liberty Jazz Band led a procession of university leaders and deans to the stage. The gonfalon and jazz processions are Tulane traditions and ceremonial milestones that take place at Convocation and again at Commencement.

Anneliese Singh, associate provost for diversity and faculty development and chief diversity officer, provided opening remarks by reading the Tulane Land Acknowledgement, which honors the original inhabitants of the city of New Orleans and pays respect to past and current Native Americans/First Nations/Indigenous communities in Louisiana.

Tulane President Michael A. Fitts then addressed the new class: “My fellow Tulanians, welcome home!” Fitts reminded students that some may not be fully settled into their residence halls and routines yet, while others might be, and that once-set decisions for the future could change over time.

“The point is: You have options. You have flexibility,” Fitts said. “Take advantage of this flexibility. Use this time to learn, engage and grow.”

Students were provided second-line umbrellas, which they were encouraged to adorn with memorabilia.

“Personalize your umbrella. Make it your own. Be prepared to join the parade.” Fitts said.

But the umbrella also serves as a metaphor, Fitts explained. In London in the 1750s, umbrellas were “seen as a mark of weak character” and those who carried one opened themselves up to public scrutiny.

“But one day, a man named Jonas Hanway had the audacity to use an umbrella in London,” Fitts said. Hanway was met with insults, garbage was thrown at him and carriage drivers who attempted to run him over.

“But they failed, and he persisted,” Fitts said. By the time Hanway died years later, umbrellas were not taboo.

“It was seen as an act of defiance, and therefore required an act of courage,” Fitts said. “That’s why the umbrella is such a perfect symbol for the start of your Tulane journey.”

“You’ve already taken the first step,” Fitts assured students. “Today, and each time you break out your Convocation umbrella, I want you to think of Jonas Hanway.”

Fitts laid out three points for students to remember. “No. 1: New ideas, even good ones, can be met with resistance.” He noted that change and success can be slow, but students are at a perfect place to build on their record of success.

Fitts highlighted Tulane’s expert faculty members, vast alumni network and the city of New Orleans as tools that can empower students for future success. Although there will be setbacks, and sometimes failures, “They cannot stop you if you do not quit,” he said. “If you keep on the path of persistence, your ideas can break through.”

Fitts’ second point was: “Believe in what’s possible and make it happen.” He challenged students to become optimists in their pursuits. Optimism is about “seeing problems as possibilities.” He explained that two Tulane students used such a mindset to create Glass Half Full, a glass recycling program in New Orleans, which the city lacked previously. The program turns the recycled glass into sand; that sand is then used to restore Louisiana’s receding coast. The students “used a problem to solve a problem,” he said.

Fitts’ final point tied in the umbrella metaphor: “Umbrellas — and minds — work best when they are open.”

Keeping an open mind isn’t about changing who you are as a person, “It’s about getting to know the best version of you and knowing how that person fits into the world.” Fitts said that fellow Tulane students and faculty “make room” for one another to learn, grow and make mistakes.

“We do this, because it is our motto: not for one’s self, but for one’s own,” he said. “Together, with our umbrellas, we are prepared for any storm.”

The Tulane Marching Band played a musical interlude before Robin Forman, senior vice president for academic affairs and provost, addressed the class. Forman said that Tulane allows students to free themselves from past experiences and thoughts and opens them up to new ones. Forman reminded students that, along the way, they must be prepared to share their authentic selves.

Following Forman’s remarks, Lee Skinner, dean of Newcomb-Tulane College (NTC), reiterated that Tulane and NTC foster opportunities, resources and classes that allow students to succeed and thrive. Skinner told students to seek out the programs, courses and experiences that bring them joy but also challenge them.

Fitts concluded with a hearty “Roll Wave!” cheer. Students grabbed their new umbrellas, and following Dr. White’s band, they paraded out of the arena with a second-line of faculty members, Wave Leaders, band members and other student spirit leaders cheering them onto McAlister Way, known as the traditional “Rite of Passage.” The new Tulanians had embarked on their academic journey.