If exorbitant gasoline prices have you thinking about pumping up the tires on your old bicycle, the Tulane Office of Environmental Affairs is on your side. The office wants to make bicycling the preferred method of travel on the uptown campus and the surrounding area. 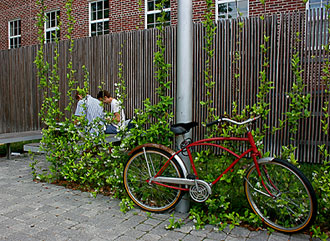 Riding a bike is not only a convenient way to get around the uptown campus. It's also good for the environment and good for your health. (Photo by Tricia Travis)

To encourage the "Bike Tulane" effort, Liz Davey, environmental coordinator, is working with a group of students, staff and faculty to boost bike safety and education.

"A bike is the greenest, cheapest way to get around, but in New Orleans it's also the best way to enjoy the beauty of our neighborhoods," Davey says.

Since 2002, Bike Tulane has worked on a number of projects including research for a five-parish, regional bicycle master plan. Bike Tulane's website contains a list of cycling clubs, bike laws and rights, and information about nearby biking trails.

The group also facilitated an update to the Louisiana driver's manual to include a section about bicycling.

"We received a grant for students to pilot a bike study, and we used that to look at the language in other drivers' manuals to create an addition to Louisiana's manual," says Davey.

Davey and members of the Tulane Green Club are working to find space for a bike repair shop on the uptown campus that would provide bikers the convenience of having repairs made without having to travel off-campus.

Green Club members Philip Schapaker and Patrick Townsend have been spending their Sunday afternoons this semester performing free bicycle maintenance in Pocket Park on the uptown campus. Student mechanics plan to resume the bike clinic in the fall semester.

Schapaker and Townsend prefer to teach people how to change their own flat tires and to fix their own brakes for continued self-maintenance; they do not allow drop-off of bikes for pickup later.

Having a bike on campus comes with the responsibility of making sure that it's registered with the Tulane Department of Public Safety. According to Catherine Osborne of the Tulane traffic division, all bikes parked on campus should be registered and have a Tulane bike license attached just below the seat.

Since the city's bike division hasn't been fully operational since Hurricane Katrina, Tulane began issuing its own licenses free of charge whenever a bike is registered.

"Having people register their bikes helps us to keep track of them if they're ever lost or stolen," says Osborne. "Having your bike registered is not just a Tulane thing, it's the law."

Osborne encourages anyone with a bike to inquire about campus rules including leaving bikes on campus during the summer.

"If bikes are left on the racks after everyone leaves in May, we cut them off and store them to prevent theft," says Osborne. "This can be a problem for students who return after the summer and find that their bikes are gone. If they haven't registered, they probably won't even know where to look."