The quality of caregiving a child receives within the first two years of life directly affects brain development and IQ, according to a study by a team of researchers from Tulane and other universities. 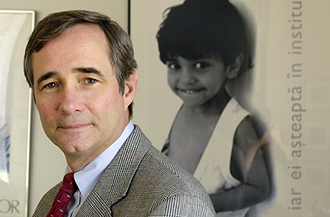 The first two years of life are especially important in shaping cognitive development, according to a study led by Charles Zeanah, professor and chief of child and adolescent psychiatry at Tulane.

“Our findings suggest that there may be a sensitive period in the first two years of life in which experiences are especially important in shaping cognitive development,” said principal investigator Charles Zeanah, the Sellars-Polchow Professor of Psychiatry and chief of child and adolescent psychiatry at the Tulane School of Medicine.

He said, “This work adds to a growing body of scientific evidence about the importance of early relationship experiences.”

The study tracked 136 boys and girls between the ages of six months to 30 months who had been abandoned at birth or soon thereafter and placed into institutions in Bucharest, Romania. Researchers trained social workers and recruited Romanian families to provide foster care for half the children, who were randomly selected.

A follow-up survey of the same children at 54 months of age showed IQs for the two groups placed in foster care after 24 months continued to significantly lag behind the group placed with families earlier in life.

The results of the study have implications for countries grappling with how best to care for abandoned, orphaned and abused children and reinforce policies that favor foster families over institutionalized care for very young children, says Zeanah, who is executive director of the Tulane Institute of Infant and Early Childhood Mental Health. Further, the model of foster care implemented in the study may be useful in the United States, where 500,000 children are currently in care.

The research results appeared in the Dec. 21, 2007, issue of the journal Science, published by the American Association for the Advancement of Science, the world's largest general scientific organization. The study was conducted in collaboration with Charles Nelson at Harvard University, Nathan Fox at the University of Maryland, Peter Marshall at Temple University and Anna Smyke, assistant professor in child psychiatry at Tulane.