The Sky Is Not Falling

From the fear mongering before the millennium, to the less noticed hubbub surrounding 6/6/06, it seems a new doomsday is always just around the corner. We only have four years to plan for the next one, Dec. 21, 2012  the day the Maya long-count calendar ends after more than 5,000 years. Before you cash in your retirement fund and throw caution to the wind, professors with Tulane's Middle American Research Institute, as well as the Maya, believe the apocalyptic theory is without merit. 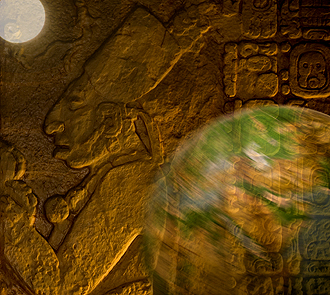 The ancient Maya long-count calendar ends a cycle on Dec. 21, 2012, prompting doomsday predictions by some, but Tulane researchers and the modern Maya all disagree. (Photo illustration by Paula Burch-Celentano)

“It's a crock,” says Harvey Bricker, professor emeritus of anthropology and researcher with the institute. "It's based on ignorance and misinformation. One starts with the clear statement that the Maya calendar will not end in 2012. It is the end of one calendrical unit. It's not the end of the calendar or the end of the world.”

Bricker is not alone in his assertion. The director of the institute, E. Wyllys Andrews, agrees those perpetuating the theory are confusing the end of one unit with the end of the calendar itself.

“There will be another cycle,” Andrews says. “We know the Maya thought there was one before this, and that implies they were comfortable with the idea of another one after this.”

Judith Maxwell, a professor of anthropology and researcher specializing in the Maya, agrees.

“I think it is inherent in the concept of the calendar,” Maxwell says. “In 2000, people thought the world was going to end because it was the end of a cycle. There is some kind of folk expectation when one cycle ends, it will not just automatically begin again.”

Maxwell, who spends time in Guatemala every year, says the descendants of the Maya don't believe the end is near either. In fact, she says some shamans in that area today, called Daykeepers, attribute the theory to misinterpretation.

“The Daykeepers mention the date in 2012 and say it a misunderstanding of crystal gazers, new agers who have latched onto [this apocalyptic theory],” Maxwell says.

Bricker says he thinks the end-of-days theories attached to the Maya calendar fit into some pre-existing notions of people who are expecting a cataclysmic event in the near future.

“It fits into Christian religious beliefs,” says Bricker. “There are some sects or denominations who believe the end of the world is near. When they hear about 2012, it just reinforces their beliefs.”

He says that it is clear that this cycle is not the only one that the Maya believed would occur.

“There are abundant written references to dates before the current era, and there are written records about the time after the current era,” Bricker says.“You know what's going to happen on the 22nd of December 2012? It will be the first day of the rest of our lives.”