Waistlines are expanding at such an alarming rate across the globe that, if trends hold, almost 58 percent of the world's population will be overweight or obese by 2030, according to researchers at the Tulane School of Public Health and Tropical Medicine. 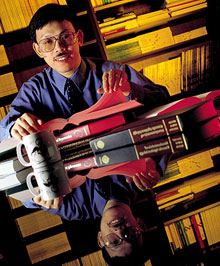 Results of a study highlight the need for the World Health Organization and governments to support programs that target maintaining a healthy weight, says Tulane researcher Dr. Jiang He. (Photo by Paula Burch-Celentano)

Almost one-third of the world is already considered overweight or obese, according to 2005 data examined in "Global Burden of Obesity in 2005 and Projections to 2030," published in the latest issue of the International Journal of Obesity.

The research is significant because it is the first to pool systematically the peer-reviewed data from more than 100 countries into one comprehensive global estimate for obesity, according to Dr. Jiang He, the Joseph S. Copes Chair and Professor of Epidemiology and Medicine at Tulane.

Researchers compiled results from population-based studies that were published in peer-reviewed journals from January 1990 through August 2007. Overall, the researchers employed 72 national, 22 multisite and 14 regional studies from 106 countries, covering approximately 88 percent of the world's population.

The study found that, as of 2005, approximately 23.2 percent of the world's adult population was overweight and 9.8 percent was obese. Roughly 937 million adults were overweight and 396 million were obese.

If current trends continue, the number of overweight individuals will more than double to 2.16 billion by 2030; the number of obese adults will grow to 1.12 billion during the same time period.

The estimates highlight the need for the World Health Organization and governments to support programs that target maintaining a healthy weight, He says.

Epidemiologic studies indicate that obesity and being overweight are important risk factors for diabetes, cardiovascular disease, cancer and premature death. "The high prevalence of overweight and obesity, combined with their concomitant health risks, makes it a particularly relevant worldwide public health challenge," the authors conclude.

Public health initiatives to reduce the rates of obesity and its complications have been launched in some economically developed countries, according to the researchers. Unfortunately, such programs are scarce in developing countries, where most overweight and obese individuals will reside.

"Primary prevention of these conditions is a better alternative to the treatment of obesity, especially in areas where healthcare resources are limited," say the authors.

The research was supported by a grant from the National Heart, Lung, and Blood Institute of the National Institutes of Health. The lead author is Tanika Kelly, a doctoral candidate at the School of Public Health and Tropical Medicine. Co-authors include faculty and staff from the Department of Epidemiology  He; Wenjie Yang, a postdoctoral fellow; Carol Chen, a biostatistician; and Kristi Reynolds, assistant professor of epidemiology.