White coats  the garb of clinicians and researchers  were placed on the shoulders of 178 incoming students of Tulane University School of Medicine during the school's annual White Coat Ceremony at the Riverside Hilton on Monday (Aug. 4). 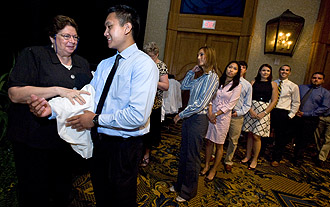 Carol Terre, senior executive secretary in the School of Medicine's Office of Admissions and Student Affairs, hands a white coat to David Sean Almario of Salinas, Calif., who received his undergraduate degree from the University of Californiaâ“Irvine. (Photos by Paula Burch-Celentano)

During this traditional kickoff of the new academic year, the members of the class of 2012, the largest in the history of the school, celebrated the first step on the way to becoming physicians, along with family and friends.

“This is really a great day,” said Dr. Marc Kahn, professor of medicine and senior assistant dean for admissions and student affairs at the medical school.

“This is the day that we welcome the students into the profession of medicine. It's really their first introduction into medicine as a profession, and it begins our four-year curriculum in ethics and professionalism. We're really excited to have 178 new people and we would like as many as possible to stay and be physicians in our state.”

On receiving their coats, the students were presented with pins from the Arnold P. Gold Foundation for Humanism in Medicine, as well as blue and green patches depicting the logo of the Tulane medical school for their coats. The students also will receive their first stethoscopes from the Tulane Medical Alumni Association.

“This is the culmination of a lot of hard work,” says Joe Larriviere, a Tulane graduate and new class member from Baton Rouge, La. “It's one more step to go before the dream is realized.” 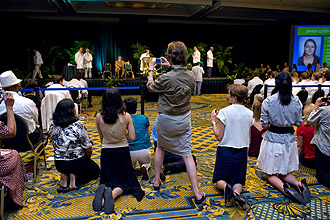 Capturing the moment on film, family members record the White Coat Ceremony that celebrates the start of medical careers at Tulane for 178 students, the largest class in school history.

For New Jersey native and Tulane master of public health graduate Casey Coffey, “It's a new beginning, starting toward the career that I've been looking forward to since I was about five years old.”

The keynote address was delivered by Dr. John R. Clifford, who served as Tulane's chief of neurosurgery and currently is director of graduate medical education at Our Lady of the Lake Hospital in Baton Rouge.

The students were chosen from among 8,307 applicants, a record for the school and up from an earlier record of 6,800 applicants last year. Twenty-six students from Louisiana are among the incoming students, and 36 other states also are represented.

“We have 34 from California, 11 from New York, six from Texas and Washington, and five each from Massachusetts, New Jersey, Pennsylvania and Virginia,” Kahn said.

The students are gearing up for careers in pediatrics, family medicine, surgery, orthopaedic surgery, emergency medicine, primary care and neurology. Classes for the School of Medicine class of 2012 began Tuesday (August 5).