She calls herself “the facilitator.” Sara Gershen was the first person students saw during the first week of classes as they arrived for appointments at the Tulane Academic Advising Center. Gershen, who greeted more than 900 students in that first week, serves as a traffic cop of sorts, directing students to various offices at the center. 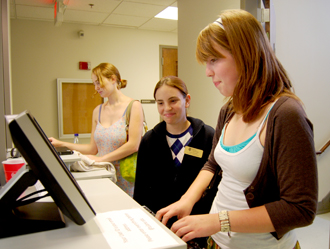 Gershan is a 2008 Tulane graduate. Her official title is “academic advising associate,” a new position created to improve communications with students.

“I'm here to help out and make sure students have correct information,” Gershan explains. “I think it's a good idea to reach out to students to help make the system better.”

The creation of Gershen's position is among many changes that have taken place at the center since last spring. Most notably, the advising staff has increased in number, significantly reducing the ratio of advisers to students.

“We've hired eight more advisers so now we have a total of 20 advisers. That's one adviser for every 250 students,” says Amjad Ayoubi associate dean of Newcomb-Tulane College and executive director of the advising center. In addition, Ayoubi says, advisers have been reorganized into specialized teams to better serve students.

The advising center also has instituted new features to make it easier for students to see their advisers. For example, because expanded hours worked so well last spring, longer hours have been set up during registration periods.

This semester, the center also established an “appointment-only” policy to reduce wait times. The appointment system offers the potential for 300 students per day to meet with advisers. During the registration period, appointments were 95 percent full.

Jonathan Loeb, a first-year student from Boston, says that he was pleased with the new system. He made an appointment with his adviser to discuss a change in his class schedule. And in a 15-minute meeting, the issue was resolved. “It went great,” Loeb says. “I did everything I needed to do and got out quickly.”

Ayoubi says the center's new location in Stanley Thomas Hall at the heart of campus is a tremendous convenience, especially this summer when first-year students could pre-register at the building's computer center. “That was a great success,” he says. “We registered 1,000 students in person and the rest by phone.” According to Ayoubi, 90 percent of those students rated their advising session as satisfactory or highly satisfactory.

More innovations are on the way as the semester progresses, says Ayoubi. Students should check the center's regularly updated website, which also is a good source for faculty and staff. In addition to offering online appointments, the site provides helpful information about academic programs, including an upcoming event that Ayoubi promises will be a real attraction: Red Beans and Advising on Mondays. The first of these special events is on Monday (Sept. 22).