Commitment to Service: A National Obligation

“National service should be a mandatory requirement for all U.S. citizens,” said Mark Schneider, who served as director of the U.S. Peace Corps from 1999 until 2001. He spoke to students on the uptown campus on Tuesday (Oct. 7) about the value of national service in an interdependent world. 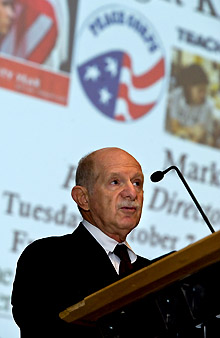 Mark Schneider, director of the U.S. Peace Corps from 1999 until 2001, speaks to students on the uptown campus on Tuesday (Oct. 7). (Photos by Paula Burch-Celentano)

Addressing “The Right Kind of Obligation” to a group gathered in Freeman Auditorium at the Woldenberg Art Center, Schneider lauded Tulane for its public service graduation requirement as he advocated for other universities to do the same.

For more than 40 years, Schneider has been active in public life with the Peace Corps, the Human Rights Bureau of the U.S. State Department, the Bureau for Latin America and the Caribbean at the U.S. Agency for International Development and the Pan American Health Organization.

Schneider is senior vice president of the International Crisis Group, directing the Washington advocacy office, which conveys analyses and recommendations to the White House, the U.S. State Department, Department of Defense and Congress along with the World Bank and other international organizations.

He also serves as special adviser on Latin America, HIV/AIDS and security. In addition, he is a member of the Democracy Network, a group of former government officials, academics and members of nongovernmental organizations aiding Latin American and Caribbean nations in promoting and defending democracy in the region.

While at Tulane, Schneider also spoke at the Stone Center for Latin American Studies and in a political sciences class.

Schneider has fought for the expansion of the Peace Corps. Currently there are more than 8,000 active Peace Corps volunteers and trainees serving in 139 countries.

Last year, Schneider testified before the U.S. Senate Foreign Relations Committee in favor of an act that sought to expand the Peace Corps to 15,000 volunteers by the federal agency's 50th anniversary in 2011. While both presidential candidates Sen. John McCain and Sen. Barack Obama say they support doubling the number of Peace Corps volunteers, Schneider said he believes the number should be multiplied five-fold. 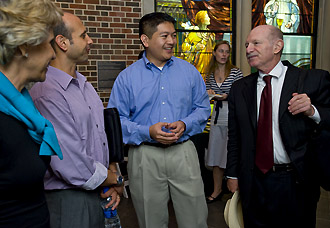 “Young people today are ready to do more to contribute to their community and to their country,” said Schneider, adding that funding one year of national service by all U.S. citizens would cost a fraction of the cost of the war in Iraq and would do more to promote international peace.

Schneider served as a Peace Corps volunteer in El Salvador with his wife in 1966â“68. “Basically, we were community organizers and proud of it,”he said.

One million more people in the United States reported doing community service in 2007 than in 2002, according to Vincent Ilustre, executive director of the Tulane Center for Public Service, host of the event.

The importance of national service was highlighted at the recent Service Nation Summit, which Ilustre and Tulane President Scott Cowen attended in New York on Sept. 11â“12.

“We're hoping to energize students to serve beyond graduation, to think of opportunities in public service fields, and we hope to inculcate in the students the mission to serve throughout their lives,” Ilustre said.