The Tulane University uptown campus stretching from Gibson Hall to Freret Street is being transformed into an open-air art gallery with the installation of six large modern sculptures this week. 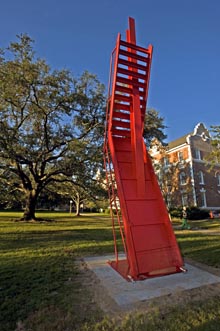 “Stairway to the Stars,” a 28-foot-tall composition of welded steel by sculptor Mark De Suvero, is in place on the Gibson quad as part of the “Sculpture for New Orleans” project. (Photos by Paula Burch-Celentano)

“This display of sculpture at Tulane is an outgrowth of the 'Sculpture for New Orleans' project,” says Jeremy Jernegan, associate professor of art and associate dean for finance and planning in the School of Liberal Arts.

Tulane is a co-sponsor of this exhibition and one of a number of institutions throughout New Orleans participating in the “Sculpture for New Orleans” initiative, according to Jernegan. Other organizations involved include the New Orleans Museum of Art, the Ogden Museum of Southern Art and the Downtown Development District. Each is sponsoring the public display of modern sculptures by prominent American and international artists.

Pieces going on display by Tulane Universitty faculty members include “Timber” by Gene Koss, professor of art. This work is a 14-foot-tall, 16-foot-long sculpture fabricated from steel plate, a massive wooden beam and cast glass plates.

Steve Durow, professor of practice in art, contributes “Dasien Column,” a cast glass and steel sculpture assembled into a segmented column. “Full Weight,” a glazed ceramic and steel sculpture by Jernegan, is composed of organic and rectilinear ceramic forms juxtaposed in a totemic structure.

Sculptures by artists not on the Tulane faculty that have been provided by Mariposa for the Tulane installation are “Freckle” by John Clement, “Staring at the Ocean” by George Tobolowsky, and largest of all, “Stairway to the Stars,” a 28-foot-tall composition of welded steel by the acclaimed sculptor Mark Di Suvero.

Sponsoring “Sculpture for New Orleans” is the Mariposa Arts Foundation, the brainchild of sculptor and New Orleans native Michael Manjarris. Now residing in Houston, Manjarris developed Mariposa in part to locate his sculptures and the works of other artists in urban public places. 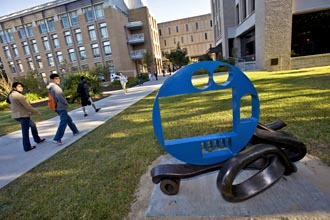 George Tobolowsky's sculpture, “Staring at the Ocean,” draws the attention of passersby. It is one of six modern art pieces to be displayed outdoors on the Tulane campus for two years.

After Katrina, Manjaris proposed “Sculpture for New Orleans” to focus national and international attention on the New Orleans art scene as well as to assist local artists with networking opportunities.

The project kicked into high gear in February 2008 with the installation of a monumental stainless steel and bronze sculpture in front of the Ogden Museum of Southern Art in downtown New Orleans. Since then, the initiative has placed major sculptures in Audubon Park, Lafayette Square and City Park.

“While I was serving as the art department chair I was approached by Michael Manjarris, and he solicited me to participate and site some of these works here on the Tulane campus,” Jernegan says.

“During discussions about that, we decided to expand it and feature our own faculty artists as well as outside sculptors. We felt it was a good opportunity to engage in a visual dialog with the national and international art community.”

The six sculptures are slated to remain on campus for two years.