Architecture and Type, Side by Side

In Clarence John Laughlin's photograph of the Stephens Buick Co., the storefront window glimmers, reflecting the street scene while a curvilinear arrow points to the service entrance. Enormous letters spelling out “B-U-I-C-K” hover above an undulating cantilevered roof. The 1950 image by Laughlin of the car dealership on Carondelet Street in downtown New Orleans is part of the current exhibit at the Southeastern Architectural Archive  “Architext: The Unity of Architecture and Typography.” 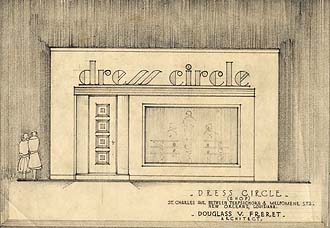 A drawing of the facade of the Dress Circle shop by architect Douglas Freret emphasizes unusual tilting s's in the signage. The Dress Circle sign was a landmark on St. Charles Avenue for years. The drawing and a photograph of the building are included in the exhibit, “Architext.” (Images courtesy of the Southeastern Architectural Archive)

The exhibit covers architectural letterforms from the Renaissance to the mid-20th century, showing how typography and architecture relate in intriguing ways, says Keli Rylance, head of the Southeastern Architectural Archive and co-curator of the exhibit.

The exhibit includes photographs of buildings, architectural drawings and rare books of early lettering as well as a display of mechanical tools used for making letters.

From hand-drawn letters on architectural drawings to words chiseled in classical letter styles on stone structures to sleek, aluminum letters on post-modern buildings, the exhibit presents the relationship between typography and architecture.

Designed by architects Freret &amp; Wolf, the Stephens building is an example of the way architecture has been influenced by the shapes of letters  and the importance of signage on buildings.

Rylance says that she and co-curator Kevin Williams featured the Stephens, A.S. Aloe and Dress Circle buildings because of the distinctive interplay between their architectural features and signage. 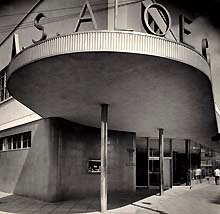 The exterior and marquee of the A.S. Aloe Co. building at Tulane Avenue and LaSalle Street are examples of the interrelationship between architecture and typography.

Architects and typographers have frequently collaborated, says Rylance. And lettering was once part of the architecture curriculum before the computerized standardization of typefaces and computer-aided designs came to dominate professional practice.

Rylance's expertise is in the realm of the history of books, especially as it relates to festival art and architecture. She's been head of the archive for only a year. She says, “I wanted to plan an exhibit that would play off my background and research interests with the holdings of the Southeastern Architectural Archive.”

Rylance says that Williams, who has been a library associate in the archive for nearly 16 years, is a “fantastic colleague” and that organizing the exhibit was a “great collaborative effort” because of his knowledge of the archive's holdings.

The exhibit is on view in room 300 of Jones Hall until May 8.

In conjunction with the exhibit, on April 22 at 7 p.m., New Orleans graphic designer Tom Varisco will speak in Jones Hall, room 306, about his new book, Signs of New Orleans.