When Tulane sophomore, Jennifer Weeman, left Staten Island, N.Y., for college, she took along her mother's advice to always be aware of her surroundings. With the help of the Tulane University Police Department and members of the Peer Health Advocates at Tulane, Weeman has incorporated that advice into a self-defense presentation, “Hit 'em Where It Hurts,” in hopes of encouraging dialogue about the threat of rape and sexual assault among college women. 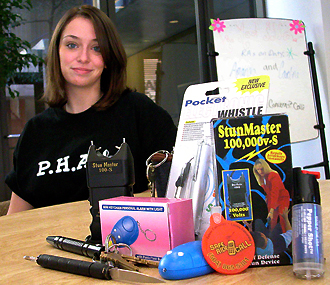 Jennifer Weeman, a Tulane sophomore, wants college women to learn to protect themselves from personal attacks. Her presentation encourages dialogue about techniques to help ward off attackers. (Photo by Alicia Duplessis)

“Whenever I would ride the trains back at home, my mother would always remind me to be aware of my surroundings,” says Weeman, who is shocked by the number of female students she sees walking alone after dark. “It bothers me when girls say that nothing will happen to them, because the reality is that everyone is susceptible to being a victim at any moment.”

Although Weeman does not claim to be an expert at self-defense, she makes herself knowledgeable by gathering information from reliable sources including Sgt. Clinton Rollin of the Tulane Police Department's Crime Prevention and Victim's Resources Division.

Weeman says she could never have put her program together without the help of her fellow PHAT (Peer Health Advocates at Tulane) members and Rollin who has worked for 10 years in law enforcement.

“When Jennifer first came to me she was interested in a presentation that focused mostly on physical defense, but we've already got that in our Rape Aggression Defense (RAD) program offered on campus,” says Rollin. “Together we decided that her presentation should focus on reducing and recognizing risk by giving crime prevention safety techniques that teach safety and responsibility.”

After receiving guidance from Rollin, Weeman and fellow PHAT member, Holly Gill, a Tulane junior, went to work restructuring the presentation to act as an informal introduction to the RAD course. “My idea is to get the girls interested in protecting themselves. Once they are interested, I believe that they will want to go through RAD,” Weeman says.

“Hit 'em Where It Hurts” is an hour-long program held in residence halls. Statistics and guidelines for what should be done in the event of an assault are discussed. Devices to ward off an attacker such as pepper spray, rape whistles and stun guns also are demonstrated. The presentation differs from RAD, which is a three-day seminar that teaches weaponless techniques to use in case of an attack.

“Police can't be everywhere all the time, so the tips given in both RAD and in Jennifer's presentation are beneficial,” says Rollin. “The only two people who are guaranteed to be at the scene of an assault are the criminal and the good guy.”