Through the voices of survivors, volunteers and those having their homes rebuilt, stories of Hurricane Katrina will be told in video, music and live performance in “Women of NOLA: Voices of Resilience Before, During and After Katrina.” The multimedia presentation and performance on Tuesday (April 7) from 7:30 until 9 p.m. is open to the public. The show will be in Freeman Auditorium, room 205 of the Woldenberg Art Gallery on the Tulane University uptown campus. 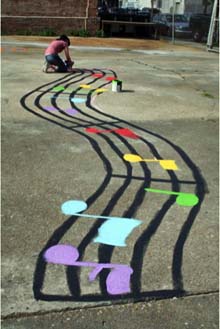 A Tulane social work student helps paint a playground at St. Alphonsus School as a sign of resilience in post-Katrina New Orleans. (Photo by Nadine Bean)

“Women of NOLA” is the result of an ongoing oral history project being conducted by Nadine Bean, a visiting professor in the Tulane School of Social Work. Bean is a founding board member of an innovative rebuilding organization called lowernine.org in New Orleans' Lower Ninth Ward, a neighborhood devastated after the levee breaches following Hurricane Katrina in 2005. “The organization pairs wood and nail-and-hammer rebuilding with mind, spirit, community rebuilding,” Bean says.

During her volunteer work in New Orleans, Bean realized that there were many survivors' stories to tell.

“Women's stories were full of strength, resilience and hope, even in the face of widespread destruction,” says Bean, who also is an associate professor in Pennsylvania at West Chester University's master of social work program. “Women are the backbone of the New Orleans families I have come to know  they are the decision-makers and spiritual guiders regarding their families' rebirths.”

Bean says that the idea to put together the multimedia theater piece grew out of her connections in the New Orleans community and inspiration from women of all cultures and ages.

Admission to the performance is free, but donations will be accepted to benefit both the lowernine.org organization and the Tulane University Institute for Psychosocial Health.

The Institute for Psychosocial Health, which is hosting the performance and exhibit, is directed by Jane Parker, clinical associate professor of social work. The institute is a research, education, training and advocacy organization that promotes higher levels of resilience in communities and primary responders, including frontline first responders as well as longer-term significant responders such as social workers, physicians, nurses, psychologists and mental health counselors.