Selling the Perks of Science

Louisiana's first lady, Supriya Jindal, wants to expose more of the state's children to math- and science-based careers. On Friday (April 3) she charged engineers at the ninth annual Tulane Engineering Forum with the task of speaking up about the perks of working in science professions. 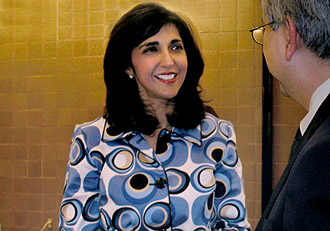 “If we could just be a little bit more persuasive, maybe, just maybe, we could reenergize a love for science and math among students all across our state and our nation,” said Jindal, who received a bachelor's degree in chemical engineering from Tulane in 1993 and an MBA in 1996. Her husband, Gov. Bobby Jindal, was elected in 2007.

Supriya Jindal spoke before a room full of her former professors, mentors and classmates during the luncheon presentation that focused on passing the torch of science learning to younger generations. Professionals currently working in science careers can be the driving force needed to inspire students who have potential in science fields, but may opt for other educational routes that they have deemed less difficult.

Stressing the importance of having an engineer explain what an engineer does, Jindal said that most people don't realize exactly what engineers do until something goes wrong.

“People who cross the Causeway [bridge] to visit their families on the north shore on a regular basis may not consider the time that went into building that particular bridge,” said Jindal. “If that bridge were to buckle or a levee were to breach, the public would have a new-found interest in engineering ... ”

In keeping with her mission, Jindal launched the Supriya Jindal Foundation for Louisiana's Children earlier this year, which she hopes will aid in the task of attracting students to medical and engineering jobs in Louisiana.

Founded in 2000, the annual Tulane Engineering Forum is presented by the engineering alumni of Tulane University and the Tulane School of Science and Engineering. Professionals representing more than 200 companies attended the sessions, held at the Ernest N. Morial Convention Center, to hear discussions about such topics as clean energy technology, flood protection and green building in the Gulf South.