A Night of Marvelous Reading

Highly acclaimed writer Joan Didion visited McAlister Auditorium on Tulane's campus on Monday night (April 6) as the third author in the English department's annual Great Writers Series. Didion, a novelist, essayist and screenwriter, read from her most recent book, The Year of Magical Thinking, to an audience of more than 1,000. 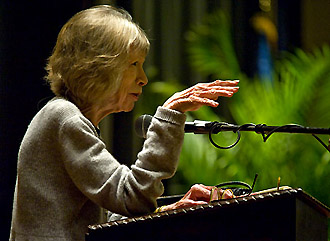 Joan Didion reads from her award-winning book, The Year of Magical Thinking, during her visit to the Tulane University campus on Monday (April 6). (Photos by Paula Burch-Celentano)

“Didion is a legendary figure: she's an iconic American writer with international stature and has been hugely influential as a journalist and essayist,” said Paula Morris, assistant professor of English. She said the event was a great success and explained that Tulane was fortunate to have Didion, as she only gives a few readings per year.

Magical Thinking, which won the National Book Award in 2005, is a memoir about the year following Didion's husband's death, and deals with the process of grieving and mourning.

Three preparatory events were scheduled preceding Didion's visit, including a lunchtime lecture entitled “Repetition, Time, and Loss in The Year of Magical Thinking,” by Louise Hornby, assistant professor of English. In line with the Creative Writing Program's aim of promoting New Orleans as a literary hub and fostering community engagement, local high school students from John McDonogh and Lusher were invited to attend the lectures.

After Monday's reading, Hornby said, “I think there's something performative about the text. It lends itself well to being read aloud.”

Indeed, the memoir was adapted for a screenplay that has been performed both domestically and abroad.

“The Year of Magical Thinking is a fantastic and powerful book, and I'm glad that that's what she chose to read from,” said Vesta Burk, a freshman studying English and political science. “I also appreciated how funny she was at moments, with her sort of dry humor, which helped break up the seriousness of the reading.” 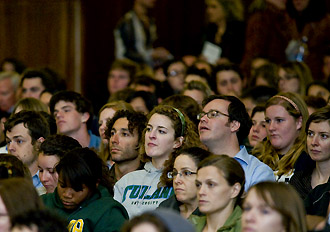 A chance to listen to literary icon Joan Didion read from one of her books brings out members of the Tulane community to McAlister Auditorium.

Following the reading, Didion answered questions from students and other audience members regarding the choices she makes as a writer. Didion, who is well-known for her mastery of multiple genres, was asked how she determines the way she wants to write about a subject that is of interest to her  for example, as fiction or non-fiction.

“Sometimes you give up on it in one form and use the material in a different way,” Didion said. “It's just something you feel.”

Discussion also included Didion's failed attempt to publish poetry, a project she had planned to write on Kobe Bryant's court case and her self-described cowardice that forced her to wait until after her parents' deaths to write about Northern California's history, a subject on which their views varied “considerably.”

Carol McDonald, a senior majoring in creative writing, worked to advertise the event in the community, and was an usher during the event.

She said, “One of the best things is seeing people so excited about something you are planning.” Burk, who also is in Morris' events management class, said meeting Didion was a “huge honor.”

The Great Writers Series, which brought Toni Morrison and Sir Salman Rushdie to campus in 2007 and 2008, is funded by the Department of English Creative Writing Fund, established by an anonymous donor in 2006.

Contributor Catherine Freshley is a Tulane senior majoring in economics and English.