In its first year back to competition after Hurricane Katrina, the 33rd-ranked Tulane women's golf team is heading to NCAA postseason play after dominating the nine other Conference USA teams and bringing home the first-place trophy from the C-USA Women's Golf Championship. 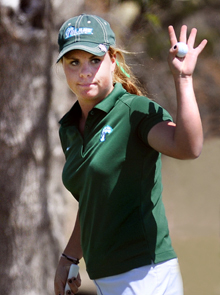 “It's a truly special day for me as a coach, but also for these players,” said Horton, who was hired in 2007 to restart the program, which had been suspended in the wake of Katrina. “This was one of our goals for the year, and for them to play the way they did coming down the stretch on the final day on a tough golf course is just a true testament to their work ethic, their poise and their determination to be a great team.”

Tulane's 23-stroke win is the second-largest margin of victory in the 14-year history of the C-USA Women's Golf Championship.

In just its first season of competition since returning, the Green Wave marched to an improbable conference title with two sophomores and four first-year players. The Wave also punched its ticket to NCAA Regionals by earning the league's automatic bid with the victory.

Tulane added its third league title in women's golf to its trophy case and reclaimed its title as the league's best after posting back-to-back C-USA team and individual championships in its last two appearances in 2004 and 2005.

In a stark contrast to Monday's (April 13) frigid and windy conditions, Tuesday's sunny and 63-degree feel seemed to energize the Green Wave. Four of the Tulane's five players finished among the field's top-10 players.

Holmqvist was in contention from start to finish. She was in second place following the first round, but bolted to the lead during the second round and led by five strokes heading into the final round. On Tuesday, she fired a 4-over par 76 and finished 10 strokes ahead of second-place Sarah Elliot of the University of Tulsa.

“This is not really my victory, it's my team's victory. It really is,” Holmqvist said. “I would never have gotten here without my coach, the support from my teammates and all the athletic staff at Tulane is just amazing  the work they've done for us.”

The NCAA Regional Tournament takes place May 7â“9. Tulane's site of competition will be announced in the coming weeks.