For his widely cited research that combines quantum and classical approaches to theoretical chemistry, Michael Herman, a professor of chemistry, will receive the Outstanding Researcher award during the third-annual School of Science and Engineering Research Day today (April 16). 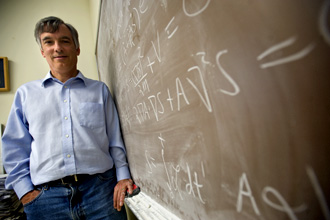 Michael Herman, professor of chemistry in the School of Science and Engineering, received the 2009 Outstanding Researcher Award during the school's third-annual Research Day. (Photo by Paula Burch-Celentano)

Herman will receive the award at a ceremony at 3 p.m. today in the Qatar Ballroom.

“If you were trying to track a satellite you would use classical mechanics like Newton's laws, but they don't apply on atomic and molecular scales because they just don't give the right answers,” explains Herman. “In the 1920s, physicists figured out the right rules on that scale and that's what's called quantum mechanics.”

Because his research is theoretical, Herman doesn't spend much, if any, time in a lab. His goal is to create theoretical and computational methods that allow other researchers to model chemical systems of interest.

“My work can be used in three ways,” says Herman. “It helps us understand how systems behave, it's used to compare with experimental data and it's used in predictive ways.”

Herman joined the faculty of the Tulane Department of Chemistry in 1981. Along with his research and teaching, Herman over the years also has taken on administrative duties, including serving as dean of the Graduate School from 2002 to 2006 and the chair of the Chemistry Department.

“I have been an administrator and a faculty member, and what I enjoy is teaching bright students and doing research,” says Herman. “The school has always been very supportive of my work in both areas.”

The Outstanding Researcher award was established in 2007 by the faculty of the School of Science and Engineering and is given based the merit of the researcher's publications, the total amount of research funding, and his or her contributions to the mission, training and mentoring programs of the university. Herman is the third recipient following John Perdew (2007) and Ulrike Diebold (2008).

A student research poster session is at 4 p.m., also in the Qatar Ballroom. The best undergraduate, graduate and postdoctoral posters will be announced at about 5:30 p.m.