Making Names for Themselves

SCOTT BURROUGHS, a student in the Tulane School of Architecture master's program, was one of 10 finalists in a design competition of contemporary, innovative and sustainable homes for the Gulf South held by Billes Architecture of New Orleans. 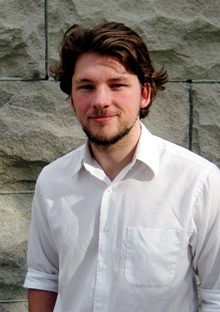 Master of architecture student Scott Burroughs is one of 10 finalists in a international design competition for new Gulf South homes. (Photo by Timothy Burroughs Sr.)

According to Burroughs, his design for the “InOut House” seeks to “increase the porosity of the standard camelback shotgun motif, while taking into account both privacy and our contemporary needs for more sustainable yet still affordable houses.” Students from across North America participated; most of the finalists were Canadian. The competition's finalists are eligible to have their homes built and marketed by Billes Architecture.

Tulane faculty and staff members also have been making names for themselves.

CARL L. BANKSTON III, professor and chair in the Department of Sociology and co-director of the Asian Studies program, co-authored a book with Stephen J. Caldas, a professor of education at Hofstra University. In Public Education  America's Civil Religion: A Social History (Teachers College Press), Bankston and Caldas bring together history, politics, religion, sociology and educational theory to ask questions about what education can accomplish for the citizens of the United States.

The authors argue that public education is a central part of American civil religion and, thus, gives us an unquestioning faith in the capacity of education to solve all of our social, economic, and political problems. The book traces the development of America's faith in public education from before the Civil War up to the present, exploring recent educational developments such as the No Child Left Behind Act. The authors discuss how this faith in education often makes it difficult for Americans to think realistically about the capacities and limitations of public schooling.

KATIE BUSBY joins Tulane today (April 17) as the first director of institutional assessment. Busby served as director of student affairs assessment and planning at the University of Alabama, where she was responsible for compiling student learning assessment reports for campus programs including general education, student affairs and academic departments. Her duties at Tulane will include oversight and implementation of the new online course evaluation system and direction of efforts to document institutional effectiveness as Tulane prepares for the upcoming Southern Association of Colleges and Schools reaffirmation review in 2011.

MARCO CASTANEDA, an assistant professor of economics, received the 2008 annual award for the best paper by a younger scholar published in the Review of Industrial Organization, the journal of the Industrial Organization Society. The title of the paper, authored with Dino Falaschetti at Florida State University, is “Does a Hospital's Profit Status Affect Its Operational Scope?” The prize was announced at the organization's conference in Boston on April 3â“5.

JEFFREY LOCKMAN, professor of psychology, is invited to be a speaker at the Cornell University Cognitive Science Symposium on April 24â“26 on “Babies in the Wild: the Role of Perception-Action Mechanisms in the Development of Adaptive Skills.”

Former All-American libero AMY MORRIS is the new top assistant coach and recruiting coordinator for volleyball. Morris was a player at both Pennsylvania State University and the University of Tennessee. She served in coaching stints at the College of the Southwest, Nicholls State University and Binghamton University. She is the first of two coaching hires that new head coach Sinisa Momic is expected to make prior to the start of the 2009 season. 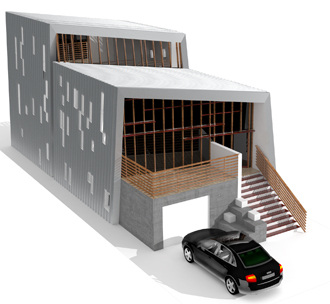 Scott Burroughs' design for the “InOut House” is a new twist on the standard camelback shotgun style. As a finalist in the competition, he is eligible to have the home built.

Tulane University's URBANbuild program was honored for its design work in New Orleans' Central City by the New Orleans chapter of the American Institute of Architects. The house at 1900 Seventh St., designed by architecture students in the URBANbuild program under BYRON MOUTON, professor of practice in architecture, was named a recipient of the Residential Award of Merit for 2009.

GROVER E. MOUTON III, an adjunct associate professor of architecture, has been named a member of the board of US/ICOMOS, the International Council on Monuments and Sites, an international non-governmental organization of professionals dedicated to the conservation of the world's historic monuments and sites. ICOMOS strives to bring together conservation specialists from all across the world and serve as a forum for professional dialogue and exchange.

Mouton and the Tulane Regional Urban Design Center served as hosts to the US/ICOMOS national conference held in New Orleans. Mouton organized and hosted a tour to the historic Evergreen Plantation while associates NICK JENISCH and ROBERT BRACKEN hosted the Young Professionals Evening.

BRUCE BOYD RAEBURN, curator of the Hogan Jazz Archive a Tulane, has published a book that tells the tale of the recognition of New Orleans jazz as a discrete style and how that recognition affected the writing of American jazz history. In New Orleans Style and the Writing of American Jazz History, (University of Michigan Press), Raeburn sheds light on some of the men and women who participated in the awakening of American jazz scholarship. As an international network of these collectors took shape between the 1920s and 1934, they provided a mechanism for the circulation of historical information on jazz, which then became the basis for the emergence of jazz literati.

The Popular Culture Association/American Culture Association honored NICK SPITZER, professor of communication and American studies, at the associations' conference in New Orleans on April 10. Spitzer received the Greg Shaw Award for Outstanding Contributions to Popular Culture Preservation, which is given by the journal Popular Music and Society in memory of Greg Shaw, a pioneering record collector, fanzine publisher, music journalist and record producer.

Spitzer is the creator and host of public radio series “American Routes,” a weekly two-hour radio program devoted to vernacular music and culture now being produced at AlcÃ©e Fortier Studios on the Tulane campus. At the award ceremony, Spitzer discussed the history of the 10-year radio program and his involvement in cultural recovery efforts in southern Louisiana in the aftermath of Hurricane Katrina.