A group of 2009 graduates from the Tulane School of Public Health and Tropical Medicine and from the University of California­â“Davis teamed up this summer to bring 100 laptop computers to children in Sierra Leone, one of the world's poorest countries. 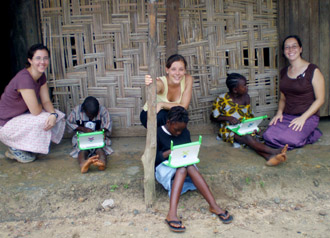 Katie McCarthy (from left), Chelsea Williams and Katie Robinette distribute XO computers for children aged 6â“12 in Sierra Leone. The sturdy laptops have built-in wireless connectivity and unique screens that are readable under direct sunlight for children who go to school outdoors. (Photo from Katie Robinette)

"The goal of the project is to increase computer literacy," says Katie Robinette, team member who received a master's of public health in 2009. "But beyond that the goal is to increase educational opportunities in general. Children just learn naturally, and giving them these laptops gives them a tool to keep on learning."

The five-member team submitted a proposal to the One Laptop Per Child organization and was one of 30 teams worldwide to win a grant. The Tulane team members received 100 laptops, a server, a training session in Kigali, Rwanda, and $10,000 for their operating budget. The other Tulane members of the team were Katie McCarthy, Chelsea Williams and Emily Cercone, who also received master of public health degrees in May.

The team distributed the 100 computers in the city of Kenema, Sierra Leone, where Robinette and two of her teammates did their internships in international health and development last year.

"Last summer a lot of the people we met didn't know much about computers and everybody wanted to learn basic things like typing and how to work the mouse," says Robinette. "These laptops were specially designed for use by children aged 6 through 12 with low-resource settings in mind. They are particularly rugged and energy-efficient with software programs that are intended for kids."

The server is in a Defense for Children International computer lab, where the laptops can be recharged, but the children own the laptops and can take them home to show their families and friends how to use them.