It might not be obvious from the standing-room-only crowds, but the Burkenroad Reports Investment Conference, which took place on Friday (April 15) at the Sheraton New Orleans Hotel, is still regarded as one of the best-kept secrets in the investment business. 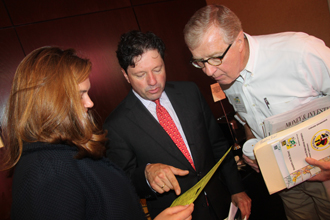 “It's not as visited yet by a lot of institutional investors or analysts, so you have the opportunity to get a lot of face time with the company executives,” says Richard Tullis, a 1997 Tulane alumnus who is a senior analyst, energy exploration and production, with Capital One Southcoast. “You're not really in competition with a ton of other investors, so you have a little bit of an advantage.” 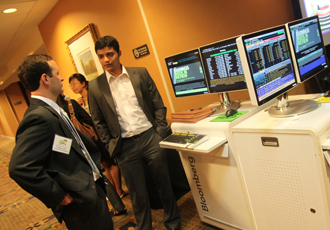 For 15 years, the conference has served as a showcase for the regional small- and mid-cap companies followed by the Burkenroad Reports equities research program at the A. B. Freeman School of Business at Tulane University. Unlike most investor events, Burkenroad caters equally to investment professionals and retail investors. Nearly 600 people attended this year's conference, making it the biggest in the event's history.

“We got many more retail investors this year,” says Peter Ricchiuti, research director of Burkenroad Reports and organizer of the conference. “The stock market has doubled in the last two years, and they've been reluctant to get in. It seems like they're finally ready to stick a toe in the water.”

Ricchiuti says some of this year's biggest draws were companies such as Cyberonics, Evolution Petroleum, and Rollins and Iberia Bank, which has emerged as a major player in Florida by purchasing the assets of banks closed by the FDIC.

“The feds close them on Friday and want a vinyl banner in front on Monday, and it can't say 'U.S. Government,'” Ricchiuti says. “I guess Iberia is just quick on its feet and knows somebody in the sign business, because they get all the good ones.”