Idealism and Wonder Reign at Commencement

Tulane's class of 2011 assembled yesterday afternoon (May 12) to celebrate a rite of passage. Twenty-three hundred strong, they hailed from 48 states and 57 countries, gathering to hear an appeal of love from one of the world's greatest entertainers, a message of hope from a Pulitzer Prizeâ“winning journalist and a call to confront their insecurities from their class speaker, who was anything but insecure. 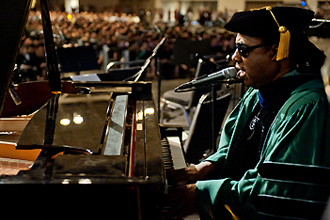 In an impromptu performance, Stevie Wonder sings his hit, “You Are the Sunshine of My Life.” (Photos by Paula Burch-Celentano)

This year's commencement was unquestionably highlighted by two impromptu musical performances by Stevie Wonder, who was in attendance to receive an honorary doctor of fine arts degree. Lending his harmonica to “Do You Know What It Means to Miss New Orleans,” a song that has become a standard at Tulane commencements, Wonder later sat down at a piano to perform an unhurried, ardent version of his hit song, “You Are the Sunshine of My Life.”

The soft-spoken Wonder also recited the lyrics of the song he recently penned to benefit those suffering from disaster in Haiti and Japan:

On this day I fathom

Just how much could happen

For our world and everything above 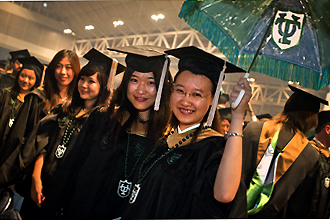 Grads share a shining moment beneath a Tulane second-line umbrella.

Lost could be all sorrow,

If 10 billion hearts were joined in love.

Less poetic, but perhaps no less idealistic, keynote speaker Thomas Friedman, a writer for The New York Times, imparted to his audience lessons he learned while covering the spirit of revolution this spring in Cairo's Tahrir Square. Friedman, recipient of three Pulitzer Prizes, sounded like anything but a hard-nosed journalist when he trumpeted the value of hope.

“Those Egyptian kids who first dared to go into Tahrir Square and call for their dictator's ouster,” said Friedman, “their only strategy was hope. They had no idea what would follow â¦ but they were propelled by a powerful hope and optimism that trumped every other concern.” 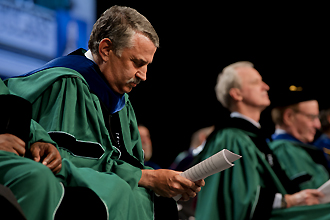 Promising Tulane President Scott Cowen that he wouldn't go “all Kanye West on you,” class speaker Christopher “Skip” Wilson announced to his classmates that he was about to stray from his prepared remarks to deliver a speech that “truly represents us as a generation.”

With vigor and humor, Wilson urged his peers to address their own insecurities, thereby liberating themselves from them. “By acknowledging and accepting [my] insecurities, I have taken the power away from someone else to dictate who I am and how I behave.”

After receiving so much in the way of advice and entertainment during the ceremony, the class of 2011 was called upon to return the favor. With a prompt from Cowen, the audience joined voices in singing “Happy Birthday” to Stevie Wonder, who celebrates his birthday today (May 13).