While many people around the world prepare to celebrate St. Patrick's Day, New Orleans' Irish heritage will take center stage for an entirely different reason. Thanks to the work of members of the Tulane community, the American Conference for Irish Studies will convene in New Orleans this year. 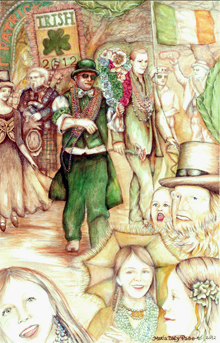 “In part, one of the things I wanted to do with this conference is introduce New Orleans to this organization,” says Laura Kelley, an adjunct faculty member in the Department of History and the conference's executive chair. “Among other items, we wanted to point out how the Irish community in New Orleans was on par with Boston and second only to New York in the antebellum period, in terms of our per capita Irish population.”

Kelley says the response has been “phenomenal,” with double the normal number of attendees registered. The conference offers keynote lectures and panel discussions beginning on Wednesday (March 14) and ending in time for the more than 600 in attendance to enjoy the city's St. Patrick's Day festivities.

“We've attracted scholars from around the world,” says Terrence Fitzmorris, associate dean of the School of Continuing Studies and chair of the conference. “They have an enormous interest in the city of New Orleans and the vital role the Irish played in the development of its culture and history.”

Fitzmorris praised Kelley for the two years of work she put into organizing the conference and says the effort will continue to pay dividends after the conference is over.

“As a result of this, more scholars will start to look at the Irish in the South,” Fitzmorris says. “Not only in New Orleans, but in other states you wouldn't normally associate with the Irish, like Mississippi and Georgia, which has a long Irish heritage.”

Kelley says the Irish are still making an impact on New Orleans and she's “thrilled” to highlight their influence.