Space to dance the blues away

Dance is Janet Andrews" life. She"s passionate about it. That"s why Marcella del Signore, assistant professor of architecture, says that it"s been so exciting to lead a Tulane City Center project to design a home for Andrews" New Orleans Dance Collective. 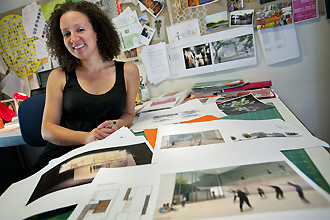 Marcella del Signore, assistant professor of architecture, is the lead designer on a Tulane City Center project for the New Orleans Dance Collective. The “visioning document” is completed, and the fundraising phase of the project has begun. (Photo by Paula Burch-Celentano)

Andrews has taught dance for 45 years, and she has seen its power to change the lives of inner-city, at-risk children.

“Dance allows them to express emotions, to deal with the turmoil in their lives, if only for the moments that they are dancing,” says Andrews.

Andrews earned a master of social work from the Tulane School of Social Work in 2006. As a professional tap dancer, she performed in the 1989 Gregory Hines film Tap.

Now her dance classes have become a kind of group therapy for children ages 4-19.

But New Orleans is lacking in dance space, says Andrews. And the New Orleans Dance Collective has never had a permanent home, moving to different locations through the years.

When Andrews heard last year about a Tulane City Center request for proposals for projects to develop neighborhoods, she jumped at the opportunity for the pro bono design assistance.

The result, so far, of the collaboration between Andrews and del Signore is a “visioning document” of plans for a 6,000-square-foot, two-story New Orleans Dance Collective building on Bienville Street on the edge of the Treme neighborhood.

Tulane architecture students Jade Jiambutr, Jason Levy and Nicholas Sackos assisted on the design that comprises three studios, a courtyard and space for public and private activities, including a store to sell dance equipment. Dance classes will be visible from the street to encourage children to come in and experience the joy of dance.

Del Signore says, “Janet has a strong vision that we"re going to raise the money to do this.”