Researchers led by Erik Svendsen of Tulane have begun testing to investigate the long-term pulmonary effects of a 2005 chlorine gas spill caused by a train derailment in Graniteville, S.C. Approximately 1,400 residents were affected. 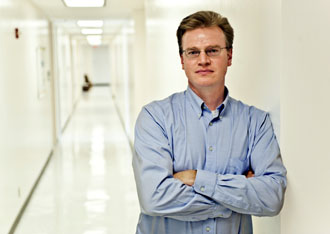 "The goal of this study is to identify and document any long-term lung health problems that have occurred since the 2005 chlorine spill," says Svendsen, associate professor of global environmental health sciences at the Tulane School of Public Health and Tropical Medicine.

While the spill affected the entire community, investigators are focusing on those residents who worked for the Graniteville/Avondale denim factory, the local cotton textile mill. Because the mill had a worker health standard to perform annual spirometry, a type of lung function testing, on all employees, pre-spill pulmonary function values are available for comparison to the measures being taken for this study.

In June a state-of-the-art diagnostic testing facility opened in Graniteville where a comprehensive suite of pulmonary function tests will be performed on each participant. In addition to pre- and post-bronchodilator spirometry, the tests include measurement of exhaled nitric oxide, characterization of exhaled breath condensate, impulse osillometry, vital capacity, lung volumes, diffusion capacity and a six-minute walk exercise test.