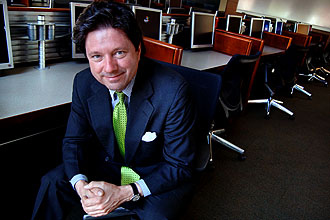 “We knew it was bigger than we expected because we ran out of cookies,” laughs Ricchiuti, professor of practice at Tulane University's A. B. Freeman School of Business and research director of the acclaimed equities analysis program.

Now in its 17th year, the conference, which took place on Friday (April 26) at the Westin New Orleans Canal Place Hotel, features presentations from senior management at many of the small- and mid-cap companies covered by the program's student analysts. This year, more than 30 companies led information sessions.

Ricchiuti says one of this year's hottest sessions was by Evolution Petroleum Corp. The Houston-based energy company specializes in tertiary recovery, a process in which carbon dioxide is used to extract oil from previously drilled fields. The company's Delhi Field in northeastern Louisiana was thought to be drilled out, but since purchasing the property eight years ago, Evolution has turned it into a monster field.

“The Delhi Field has now produced to a level where the royalties that are going to come back to Evolution are going to go up significantly between now and the end of the year,” Ricchiuti says. “The stock currently sells for about $9.50 a share and when you look at what they think they have under the ground, it ends up being closer to $18. So that was a session that people loved.”