The writing was on the wall for Anthony DelRosario. Literally. As unit coordinator of the Research Help Desk at the Howard-Tilton Memorial Library at Tulane University, DelRosario is accustomed to examining things with a critical eye, but after Hurricane Katrina his analytical approach took on an artistic purpose. 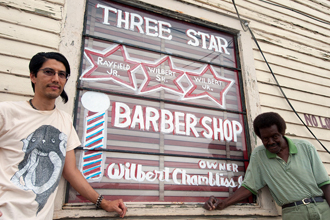 Many of the signs were autographed, “Lester Carey.” After a protracted search, on Good Friday, 2008, DelRosario tracked down Carey, a New Orleans native who has been painting signs for over 30 years.

The two men struck up a friendship, and DelRosario started photographing Carey"s signs as well as those of other local sign painters Pam Collins and Tom the Sign Man. Their signs are on everything from jazz halls, to po" boy shops, to snowball stands.

DelRosario says that Carey"s style is unique because it “straddles the line of folk art and commercial art  naÃ¯ve commercial art. Much like a metaphor for the city of New Orleans, which straddles the second lines and the Super Bowls.”

Shortly after meeting Carey, DelRosario created NOLA "Nacular, “for all things vernacular in New Orleans,” and silk-screened some T-shirts with Carey"s work. Local business Defend New Orleans carried the T-shirts, with the proceeds going to Carey.

DelRosario is in discussion with Defend New Orleans to carry NOLA "Nacular as a boutique label featuring work by Carey, Collins and Tom on T-shirts, prints, buttons and magnets.

Sign painting is a lost art, according to DelRosario, with many businesses now using to mass-produced vinyl signs.

“I am doing preservation by documentation,” Delrosario states, and in the process helping sustain local artists.