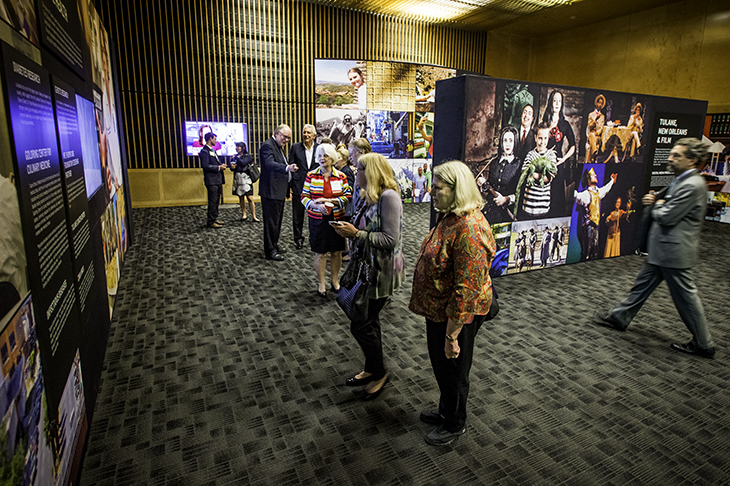 The interactive Wavemaker showcase illustrates for alumni, board members and others the university’s global reach during Wavemaker Weekend, March 17-19. The showcase will go on the road later this year. (Photo by Ryan Rivet)

After the March 17 inauguration of President Michael A. Fitts, Wavemaker Weekend kicked off with innovative events that highlighted the university’s impact and reach.

More than 350 alumni, parents, board members and other friends met on the uptown campus for the weekend, which included a speech by journalist and Board of Tulane member Walter Isaacson.

An interactive Wavemaker showcase immediately followed Isaacson’s speech, combining photography, video, and text displays in the Kendall Cram Lecture Hall in the Lavin-Bernick Center. It emphasized the extensive work that Tulane is doing to educate students, make a difference in the local and global communities, and find technological solutions to a range of issues.

“Everybody knows parts and pieces of the (Tulane) story, but not everybody is able to see … how broad Tulane’s reach really is.”

Exhibits included Tulane’s global presence, the Center for Public Service, Medicine and Global Health, and an interactive, 3-D map showing planned or new renovation or building projects, among others.

“It shows that the school is a friend of the city and helping improve the city environment as well as the students’ educational environment,” said Lori Geraci Karaosmanoglu, who graduated from Newcomb College in 1987 and went on to pursue a graduate degree from Tulane after that. Karaosmanoglu, who is also a Tulane parent, praised the showcase and the university’s current work, saying it built on an already impressive campus.

“Everybody knows parts and pieces of the (Tulane) story, but not everybody is able to see visually, in the way that it’s being demonstrated here, how broad Tulane’s reach really is,” added Albert Small Jr., who also graduated from Tulane and who is on the Board of Tulane. “I think it’s an eye opener for a lot of people who aren’t here every day.”

Wavemaker Weekend also included board and council meetings, social events, and campus tours. The Wavemaker showcase will go on display in different cities later this year.