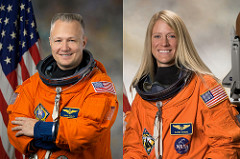 The one-day conference brings together experts from around the country to share their knowledge with more than 500 professional engineers, scientists and technical managers.

Nyberg and Hurley, who are married, are the featured luncheon speakers. They will present an overview of the last 15 years of human space flight and discuss NASA’s plans for the future.

The conference includes plenary talks, panel presentations and concurrent sessions on such engineering topics as innovative infrastructure design and construction, the future of the U.S. electrical grid, coastal restoration, aerospace, innovation and energy technology and the importance of natural gas and oil to Louisiana. Case studies and current regional projects of scientific and engineering interest will also be discussed.

Other speakers include Gary LaGrange, president and CEO of the Port of New Orleans, and Terrence Chambers, director of the Center for Energy Efficiency and Sustainable Energy at the University of Louisiana at Lafayette. LaGrange will discuss the widening of the Panama Canal and its impact on the Port, and Chambers will discuss engineering ethics.

The complete program along with registration information can be found online at http://tef.tulane.edu.