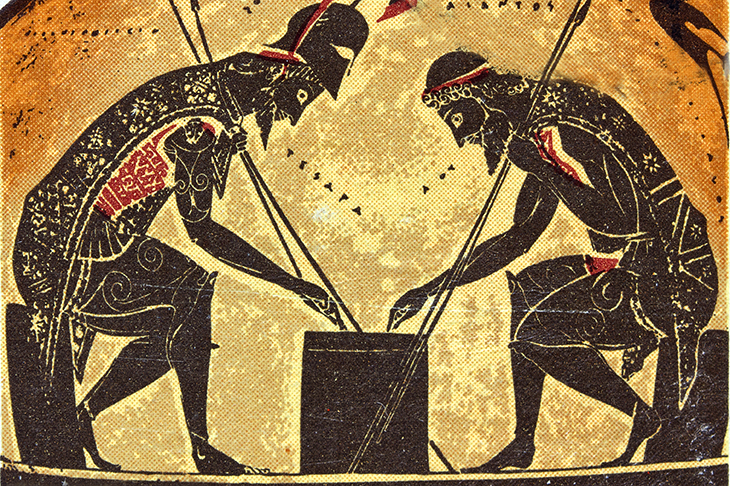 Ajax, right, famously pictured playing a game with Achilles, is the subject of a dramatic reading presented during Theater of War, the 2016 Dennis A. Georges Lecture in Hellenic Culture. (Thinkstock image)

Ancient Greek drama is uncannily prescient about war and its effects on soldiers and their families. That will play out on the Tulane University uptown campus when the 2016 Dennis A. Georges Lecture in Hellenic Culture presents Theater of War Thursday (April 7).

New York City theater company Outside the Wire will feature professional actors in a dramatic reading of Sophocles’ Ajax, a tragedy about the suicide of a hero-soldier following the Trojan War. The reading will be a provocative and useful entrée into a discussion with combat veterans on the challenges of life after war.

“It’s going to be a powerful and interesting experience, both on an emotional and intellectual level,” says event organizer Michael Brumbaugh, assistant professor in the Classical Studies Department. He noted that the audience today and in Sophocles’ time would be emphatically different: Virtually all members of Sophocles’ original audiences would have been veterans themselves or those touched by war.

“It’s going to be a powerful and interesting experience, both on an emotional and intellectual level.”

Theater of War takes place Thursday at 7 p.m. in Dixon Hall. It is free and open to the public.

Outside the Wire has produced Theater of War over 300 times, captivating audiences around the United States and Europe. At Tulane, three professional actors will perform the dramatic reading. A panel discussion, including two veterans, a military family member and a mental health professional, all from New Orleans, will follow. Audience members are invited to join in on the town hall meeting that closes the evening.

The Classics Department in the School of Liberal Arts is the event’s primary sponsor, but the interdisciplinary nature of the event is tremendous, says Tulane University President Mike Fitts. “Theater of War takes an incredibly compelling approach to an important subject,” says Fitts. “This production will link Greek tragedy to challenges facing modern war veterans and fundamental issues of health and well-being in times of war. Only a university like Tulane can bring together such diverse areas of knowledge into one powerful event.” Mary Sparacello is a communications specialist in the Office of Development Communications.