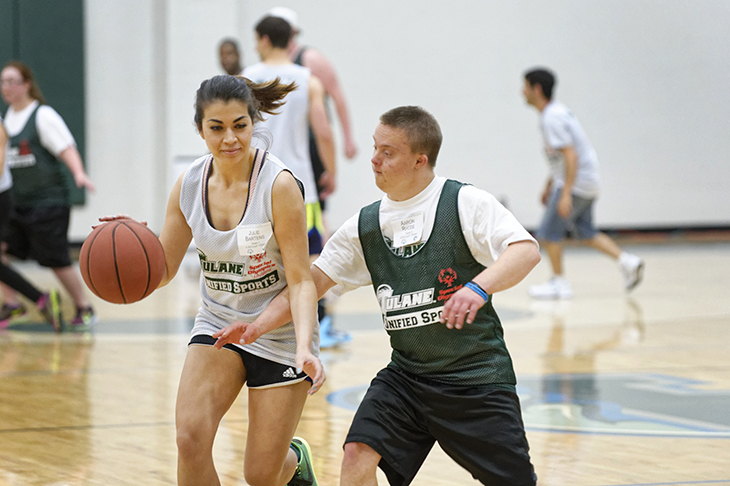 The Reily Student Recreation Center played host to a three-on-three basketball tournament on four Friday afternoons in February and March, which isn’t really news; that’s what a rec center does. But this tournament was a different type of sports competition, one that was the first of its kind in Louisiana and one of only a handful of similar tournaments across the country — a unified, inclusive competition that teamed Tulane University students with Special Olympics athletes.

Sponsored by the Goldman Office of Disability Services and the Reily Center, the tournament wrapped up the first Friday in April with a round-robin-style playoff culminating with the winning team being awarded the Goldman Cup. Gabe Feldman, Tulane law professor and area management team leader of Special Olympics–Orleans Parish, spearheaded the tournament and says that it has been “an overwhelming success.”

“The response has been unbelievable,” Feldman says. “It’s everything we hoped it would be and more, and from a personal perspective it’s been an incredible thing for me to be a part of and see these groups come together. After seeing this I know there’s no limit to what we can do.”

“This unified, inclusive model is something I know the Special Olympics leadership is eager to implement, and I’m excited that we could do it here at Tulane.”

Feldman says he hopes this is the first of many basketball seasons and looks forward to trying this type of league for other sports like flag football in the future. Feldman says that this is the direction the Special Olympics is looking toward as well.

After seeing the success of the basketball league, Feldman says he encourages people to come out for the leagues and expects the participation of both Tulane students and Special Olympics athletes to grow going forward, something he says will only raise the level of competition.

“Join the league, or just come out and watch,” Feldman says. “I think people will be impressed with how competitive it is and how much fun it is for the spectators.”