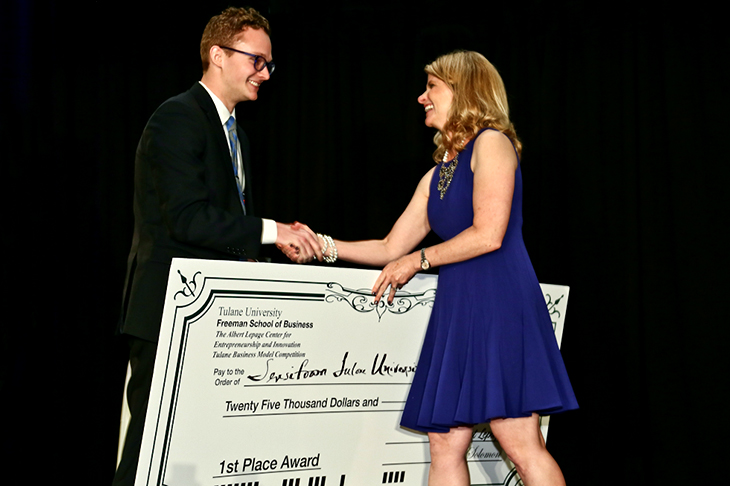 Chris Sloas, left, a 2015 graduate of the Tulane School of Science and Engineering, is congratulated by Stephanie Kleehammer, director of outreach and communications with the Lepage Center for Entrepreneurship and Innovation, after winning the 2016 Tulane Business Model Competition. (Photo by Guillermo Cabrera-Rojo)

A device to prevent pressure ulcers in patients undergoing medical procedures won first place and a grand prize of $25,000 in the 2016 Tulane Business Model Competition.

The competition, an annual presentation of the Albert Lepage Center for Entrepreneurship and Innovation at the A. B. Freeman School of Business, took place on Friday afternoon (April 15) with the winners announced that evening during an awards gala at the Audubon Tea Room.

Nisoltus Medical, a company started in Tulane University’s biomedical engineering department, won the top prize for Sensifoam, a device that adheres to patients during operations and transmits data to alert surgeons to the possibility of pressure ulcers, more commonly known as bedsores.

“I think they’re solving a real problem, both from a quality of life but also from a cost point of view for hospitals.”

According to the company’s Chris Sloas, a Tulane alumnus currently pursuing a PhD in biomedical engineering at Boston University, pressure ulcers result in 60,000 deaths annually with a cost to the health system of $11 billion. Sensifoam’s proprietary adhesive patch uses a matrix of soft, force-sensitive foams to transmit pressure data that medical personnel can use to monitor and prevent bedsores.

“I think they’re solving a real problem, both from a quality of life but also from a cost point of view for hospitals, for whom that’s a very significant issue,” said competition judge Jacques Chappuis, a Tulane alumnus who serves as co-head of Morgan Stanley’s solutions and multiasset group.

Sloas says Nisoltus Medical plans to use its winnings to manufacture additional prototypes of the device to help the company gather more concrete feedback from users.

Sensytec, a business based at the University of Houston that’s developed a smart cement technology enabling users to retrieve and analyze critical data on cement and concrete, won second place and a prize of $10,000, and BioAesthetics, a company based at Tulane University that uses regenerative medicine to reconstruct the nipple and areola complex of patients who have undergone mastectomies, won third place and a prize of $2,500.

Mark Miester is a senior editor in the A. B. Freeman School of Business.