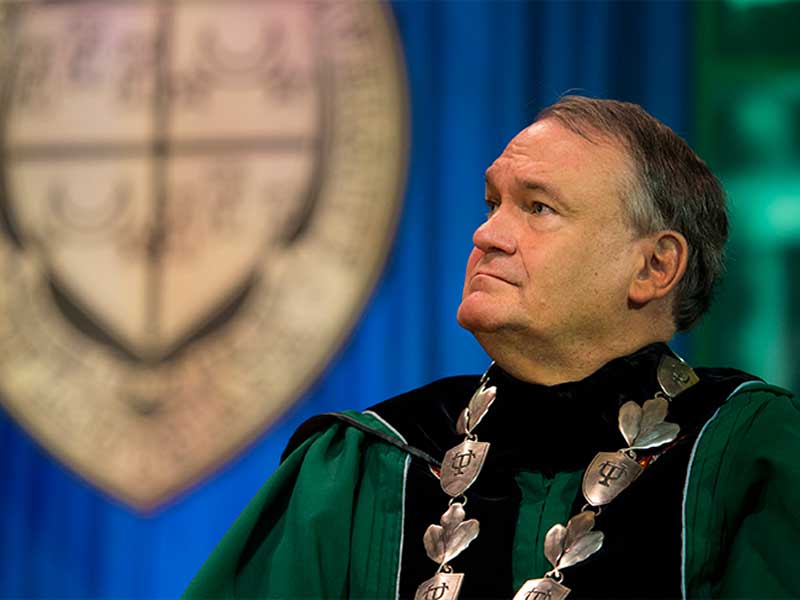 President Michael A. Fitts at his inauguration, March 17, 2016. (Photo by Paula Burch-Celentano)

Tulane University still has the “wow” factor for its 15th president, Michael A. Fitts. From his first day on the job in July 2014 to today—when he marvels at the beauty of the urban campus, the enthusiasm of the students, and the dedication of the faculty and staff—Tulane impresses his eye and his heart.

“The overwhelming impression is that students appreciate this community,” he says. “They love Tulane, they love the community, they love their classmates … they get who we are and embrace it.”

As a native Philadelphian who spent most of his life in the Northeast (but whose family also has some Southern roots), Fitts has embraced New Orleans: For a public service project, he planted trees in the Bayou Sauvage wetlands. As a Carnival participant, he rode in a Mardi Gras parade, an experience he calls “fascinating.”

“Clearly I have a job that requires lots of different approaches at different times.”

“One of the joys and educational benefits of coming to New Orleans is moving to a place that is not exactly like where you grew up,” he says. “[Here] it’s a little bit slower pace, but it’s a little more caring about one-on-one interactions and relationships. It’s more musical, more creative.”

Tulane magazine asked Fitts to reflect on his first year-plus in office and New Orleans and talk about his experiences in terms of his speeches and other missives.

ON BEING PREPARED
From ‘View From Gibson,’ the president’s email message to the Tulane community, May 8, 2015: “This week I was telling some students, who were in the midst of final exams, that I still have a dream in which I am a college student facing a final I have not prepared for at all.”

In fact, the opposite is likely true: Fitts likes to be ready. “I probably over-prepare—that’s based on having been trained as a lawyer,” he says.

This story originally appeared in the March 2016 issue of Tulane magazine.