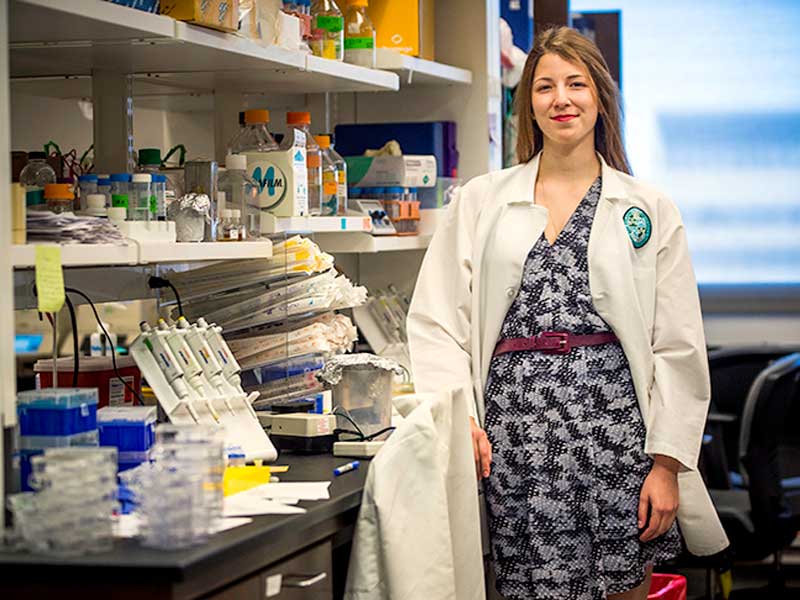 Madeline Sell earned her bachelor of science in engineering degree alongside fellow graduates at the 2016 Unified Commencement Ceremony on Saturday, May 14. (Photo by Ryan Rivet)

For two years, Madeline Sell, a 2016 graduate of Tulane University, split time between hitting the books and working in a lab at the Tulane Cancer Center.

The 20-year-old chemical and biomolecular engineering major from Phoenix collaborated with an innovative research team there, examining the roles of toxic metals nickel and cadmium as cancer-causing agents.

Sell spent one year analyzing data for the project before moving on to the lab.

“I believe she has a brilliant future ahead.”

Astrid M. Roy-Engel, associate professor of epidemiology, guided Sell as they attempted to uncover evidence of a connection between exposure to the metals and an increased risk of cancer development.

“The experience was amazing. Dr. Engel was hands-on and took initiative in training me for doing research in the future,” says Sell.

Nickel and cadmium can be naturally found in the environment but also appear in manufactured products.

“Cigarettes are the main source, but where you live is also a factor. Some areas naturally have high levels (of these metals) in the soil,” says Sell.

The metals can cause genetic instability by activating the L1 mobile element, a segment of DNA that reshuffles genetic material, potentially causing mutations or breaks leading to tumor formation or growth.

Sell and Engel investigated the genome from cells exposed to the metals, looking for evidence of increased L1 activity and consequently a higher cancer risk.

“Last semester, I presented the project to some donors on campus,” says Sell.

Sell’s post-Commencement plans include heading home to Phoenix to take some time off before pursuing a doctorate.

“We loved having her work in my lab. I believe she has a brilliant future ahead,” says Engel.