The Tulane tower that never was 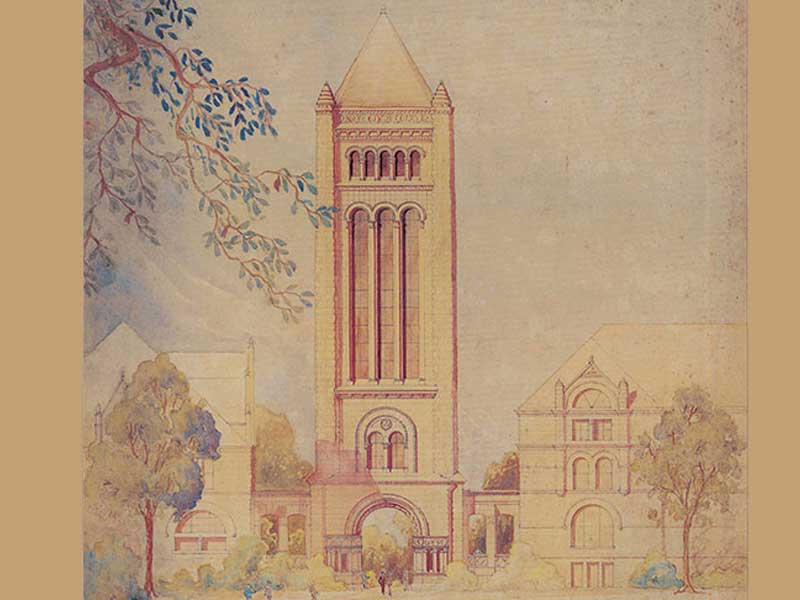 Architect and alumnus Moise Goldstein drew this rendering of a carillon tower that would have connected Tilton and Gibson halls on the Tulane campus. The tower was never built. (Image from Southeastern Architectural Archive)

A cloud of mystery shrouds a rendering in the Southeastern Architectural Archive at Tulane University. The image pictured here is an undated sketch of a nonexistent bell tower with connecting breezeways to Tilton Hall at left and Gibson Hall to the right. The entry reads: “Moise Goldstein (1882–1972), architect; Proposed Carillon Tower for Tulane University, St. Charles Avenue, New Orleans, LA.; Never built. Architectural rendering. Undated.” Goldstein, a 1902 graduate of Tulane, practiced architecture in New Orleans and along the Gulf South for nearly 50 years. He was also instrumental in the creation of the Tulane School of Architecture and the design and construction of several campus buildings including Dinwiddie and Jones halls. Milton Scheuermann Jr. (A ’56) had a long-standing relationship with Goldstein after working as his intern while a Tulane student. Scheuermann says that while the drawing is definitely done in Goldstein’s style, he believes it was actually drawn by Goldstein’s silent partner Nathaniel Courtland Curtis. “Considering the way the human figures are dressed, I would say this rendering was likely done sometime between 1915 and 1925,” says Scheuermann. That might be a solid guess. Gibson Hall was completed in 1894, and Tilton Hall followed in 1902. Closer inspection by Scheuermann, who worked as an adjunct professor at the Tulane School of Architecture before retiring in 2015 after 56 years, revealed that the positioning between the two buildings is not feasible from a construction standpoint. “I looked at the composition of the building using Google map’s aerial view, and the positioning of the tower as drawn wouldn’t work,” says Scheuermann. “I guess it’ll be a mystery as to whether the tower was drawn by request or if it was just an idea that may never have been presented.” This story originally appeared in the March 2016 issue of Tulane magazine.