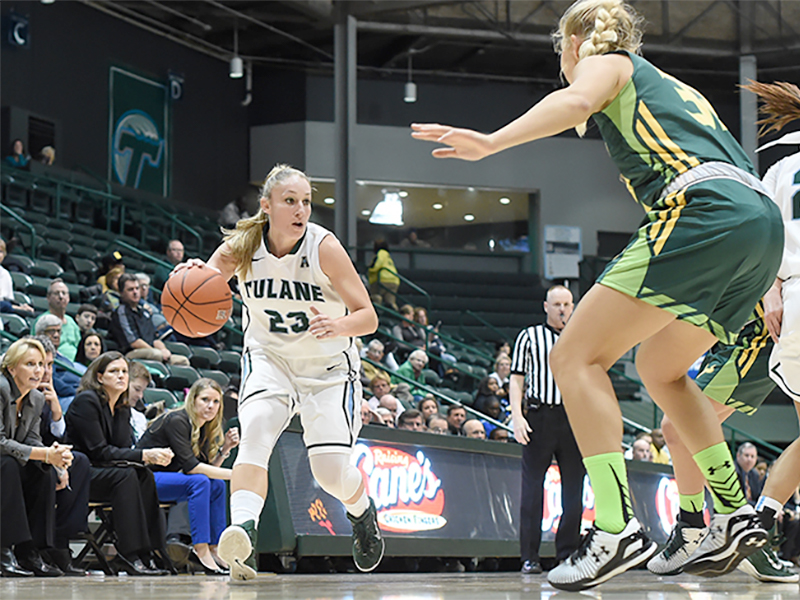 A native of Melbourne, Florida, Jamie Kaplan (No.23) is a senior guard on the Tulane women’s basketball team. She is a neuroscience major. (Photo by Parker Waters)

Late game dramatics resulted in a 71-70 win for Tulane University women’s basketball over the University of Central Florida on Jan. 13, but another feat also took place during the game. Senior guard Jamie Kaplan hit the 500 career assists mark, becoming just the second player ever at Tulane to reach the milestone.

“It didn’t even cross my mind at all (freshman year) that this is something I could achieve,” Kaplan said. “I had no idea what my role would be coming in and as the years went on, it became clear that I was getting (more and more) assists. It probably wasn’t until this year that I realized I could get 500.”

Entering the UCF game, Kaplan needed just three assists to cross over the 500 plateau. Not only did the Melbourne, Florida, native finish with a team high of six that night, but she also played in front her family. Her 503 career assists surpassed current graduate assistant Olivia Grayson (499) for second place all-time at Tulane, trailing Ashley Langford’s 722 set in the 2006-07 season.

“Someone told me before the game I only needed three assists so I kind of kept the number in my head. When Danielle (Blagg) hit the three (in the second half), I knew it was my third one and felt the pressure come off of me, and I could just play,” Kaplan said.

She began to realize that assists and creating plays was a giant piece of her arsenal in her junior campaign, when she broke the single season record with 209 assists, passing up Langford’s 207. Kaplan’s 6.7 assists per game that year ranked first all-time in a single season.

“It’s a huge part of my game so to be on a list like that is humbling,” she said.