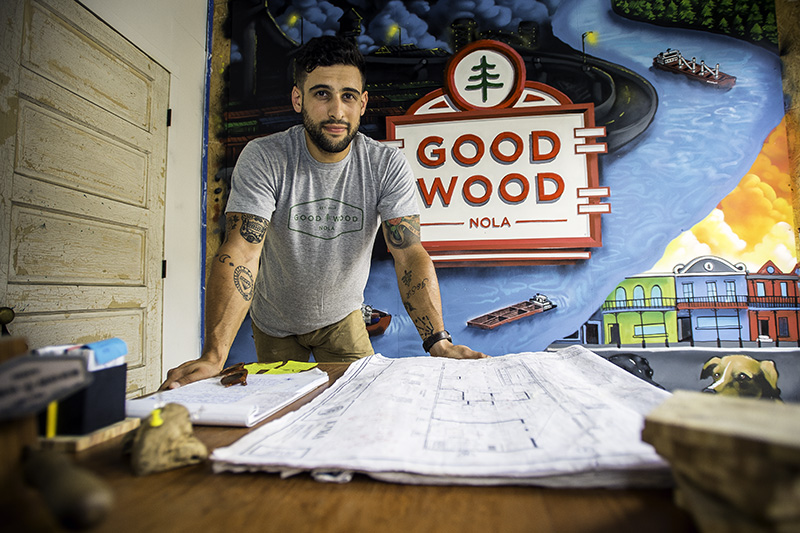 Michael Dalle Molle is the co-owner of local design company GoodWood NOLA. When asked if he had words of wisdom for recent Tulane graduates, Dalle Molle said, “At Tulane, you’re given the tools to do whatever you want in life. Tap into the alumni network, and use the resources available beyond your degree.” (Photo by Ryan Rivet)

As locals stroll under Ale on Oak’s (8124 Oak St.) Spanish cedar signage or browse Dirty Coast’s (2121 Chartres St.) rustic suspended shelves for a new T-shirt, they are getting to know the craftsmanship of Bywater-based custom design firm GoodWood NOLA.

Dalle Molle, a 2013 graduate who majored in communication, originally met Gurren while building The Road to Berlin exhibit at The National WWII Museum in 2014.

“Due to the ever-changing pressure and humidity in New Orleans, creating beautiful, highly functional exterior furniture has been our biggest challenge.”

Among the youngest men working on the exhibit, the two artisans connected and decided to open their own business after the museum project concluded.

“Due to the ever-changing pressure and humidity in New Orleans, creating beautiful, highly functional exterior furniture has been our biggest challenge. It’s loads of trial and error,” says Dalle Molle.

The company’s pieces can be seen at well-known locations, including a sleek, high-gloss reception desk at Romney Pilates Center (5619 Magazine St.) and an imaginative divider composed of refurbished doors at French Quarter gastropub Sylvain (625 Chartres St.).

“Our first client happened by chance. We were friends with the owners of District Donuts (2209 Magazine St.), and they said, ‘Come design a shelving unit for us,’” says Dalle Molle.

When the restaurant owners reviewed the shelf’s design, they asked Dalle Molle and Gurren to place the project on hold in order to take on a bigger venture — building their new restaurant, District: Hand Pie & Coffee Bar (5637 Magazine St.).

Not only was District Donuts the design firm’s first client, but the popular local doughnut destination is the company’s most recent client as well. Molle says they are currently working on the shop’s new location.