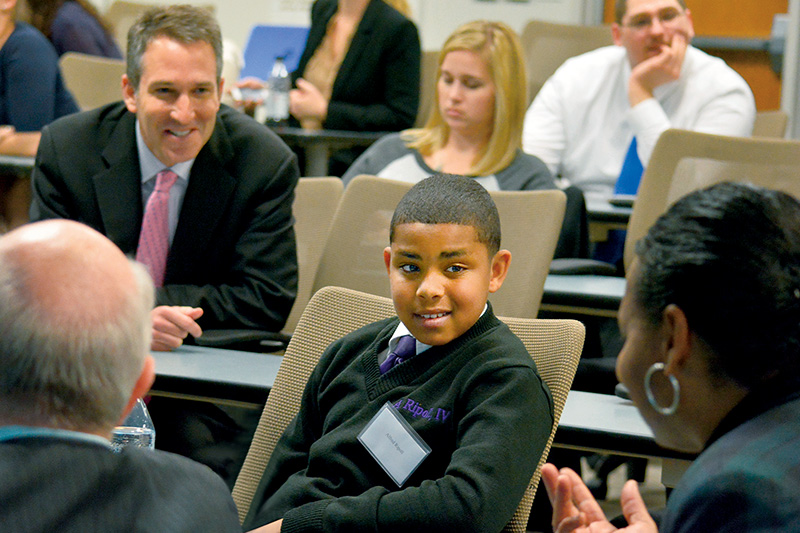 When he isn’t learning the business side of baseball, 13-year-old Alfred Ripoll IV said he dreams of being a Major League shortstop, like his favorite player, Derek Jeter. He also dreams of possibly being an engineer. And the youth program, which combines statistical analysis and baseball, has two of his passions.

“I like the math, and how it comes to me, especially what goes into calculating a salary.”

“I like the math, and how it comes to me, especially what goes into calculating a salary,” Alfred said. But this, the business side of baseball, is a new world that was unknown to him.

Feldman said the pilot program in 2015 was extremely successful, and the students immediately gravitated to the new opportunities. “They were remarkably engaged and prepared as we took them week by week, showing them what it’s like to be a baseball agent, a baseball general manager, a lawyer working in baseball—all helping them understand the industry,” he said of the first year.

The jobs include front office work, scouting, labor unions, executive management, accounting and legal work, Davis said—not necessarily the jobs that spring to mind in the context of Major League Baseball—but they are just as important as the pitchers, catchers and batters.

“One of things we looked to do is to find is career paths for the kids,” said Davis, who even at 42 is a mountain of a man and looks like he could still easily strike a homer. “You name it, and there’s probably an opportunity in sports.”

The program also prepares young people for life after sports, should they, like most, not make it as a professional athlete. It was a lesson, Davis said, that he had to learn after coming so close to making it to the big leagues. “Yeah, the hard way,” he said with a chuckle, adding that he had talent, but bad timing hurt his chances to make it to the show, like a leaguewide strike and a major management shake-up. “People don’t realize you have a small window to make it.”

Fielding Dreams appeared first in the June 2016 issue of Tulane magazine. It will be shared via New Wave as a three-part series. Look for the final installment (Part III) on Tuesday (July 12) or read the full article in PDF form here.