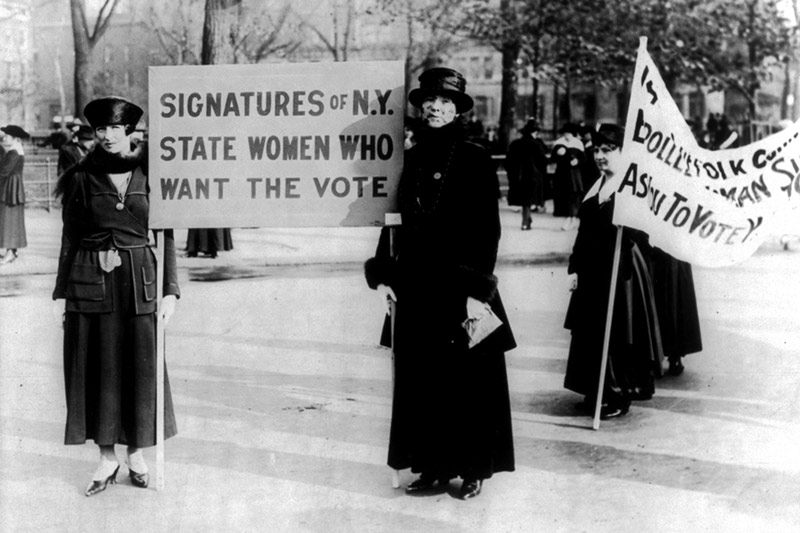 Suffragettes petition for the right to vote in New York in 1917. The first national election in which women voted was in November 1920, after the 19th Amendment to the Constitution granting women suffrage was ratified on Aug. 18, 1920. (Library of Congress)

If first-wave feminists (those who focused on women getting the right to vote in the late 19th and early 20th century) time-traveled to the Democratic National Convention in Philadelphia this week, what would they think?

Hillary Clinton will be the first woman nominated by a major political party for the presidency of the United States.

“I think they would be asking, why did it take so long?” said Celeste Lay, associate professor of political science at Tulane University. “Why did it take almost a hundred years?”

The U.S. Senate passed the 19th Amendment to the Constitution granting women the right to vote on June 4, 1919. The amendment was finally ratified on Aug. 18, 1920.

One reason that it’s taken so long for a woman to ascend to standard-bearer of her party is that Americans have a mental picture of a president as “assertive,” “strong” and “tall” — all traits associated with men, said Lay.

The stereotypical image of a U.S. president also used to be of a white man. But that changed with the election of African-American Barack Obama to the presidency in 2008 and 2012. “A crack opened up, essentially,” said Lay. “There are people who are now open to the president looking different from the way that it had been up until Obama.”

As women have slowly risen up through the pipelines of elected political office to reach senatorial and gubernatorial ranks, political scientists have found that gender does not necessarily determine how people will vote.

The fact that Clinton is a woman may neither help nor hurt her chances of being elected.