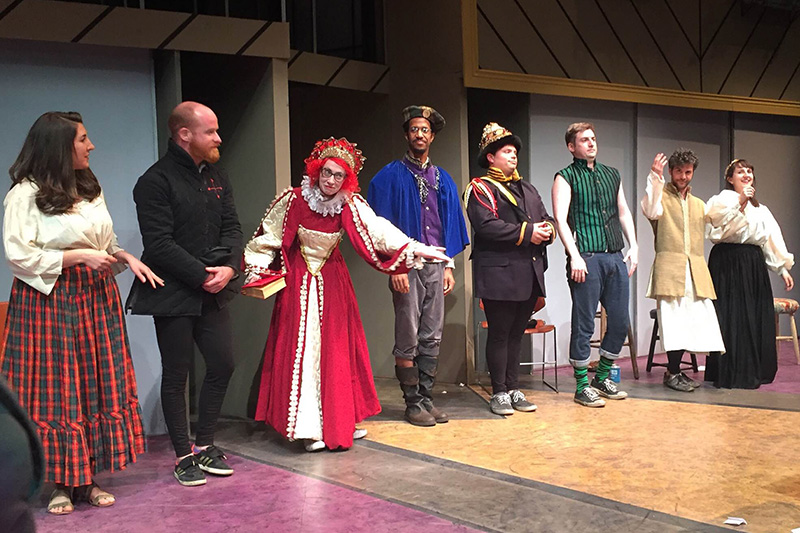 The cast of 'By Any Scenes Necessary' previously spoofed 'Macbeth' on Tuesday (June 21). (Photo provided by Cecile Monteyne)

On Wednesday (July 27), performers from local theater company The NOLA Project will take on the challenge of re-creating Shakespeare’s masterpiece Hamlet without a script, resulting in a hilarious hybrid of classic theatre and improv comedy. By Any Scenes Necessary is the title of the production, which is presented by the New Orleans Shakespeare Festival at Tulane University.

The performance will be held in the Lupin Theatre, which is located in the Dixon Hall Annex on the uptown campus.

By Any Scenes Necessary previously lampooned Macbeth on Tuesday (June 21).

“We pick a story that we all know, and improv is the way we get there.”

— Cecile Monteyne, producer of 'By Any Scenes Necessary'

This is the first year that the festival is hosting the show, which is a part of The NOLA Project’s late night comedy programming.

“The collaboration with The NOLA Project happened naturally,” said Clare Moncrief, managing director of the New Orleans Shakespeare Festival since 1999. “It’s hugely popular, and this is a wonderful show for an audience who wants to see the flipside of Shakespeare.”

Cecile Monteyne, a 2005 graduate, is the producer of the show and has been a member of The NOLA Project for two years. Monteyne will host the sidesplitting production alongside a cast of eight actors.

Monteyne said: “We pick a story that we all know, and improv is the way we get there. We go through and pick the most important scenes and expand the world of the show. We take short form games and build them into the narrative.”

The actors are assigned their characters ahead of the performance in order to prepare for wherever each outlandish scene takes them.

“It’s the Shakespeare you know and love, and we honor it by doing our homework,” said Monteyne.

The NOLA Project is already looking forward to future By Any Scenes Necessary shows, said Monteyne. “After all, there’s 34 more plays we can do.”