Preserving jazz history is all in a day’s work 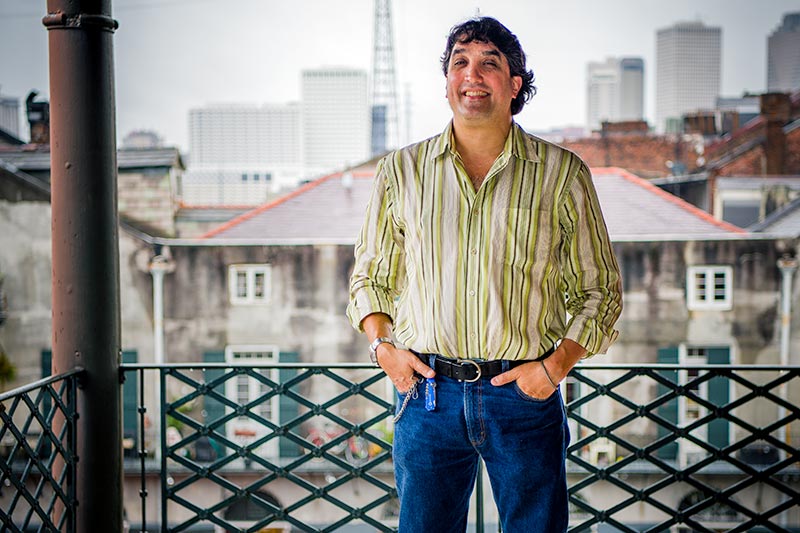 Currently the music curator for the Louisiana State Museum, David Kunian moonlights as a dj for local radio station WWOZ. When asked what kind of music he plays on his Tuesday night show “The Kitchen Sink,” Kunian said, “Everything I can.” Catch “The Kitchen Sink” on WWOZ every Tuesday from 10 p.m. to 12 a.m. (Photo by Ryan Rivet)

Tulane University alumnus David Kunian is documenting the city’s vital rhythms in his new role as music curator for the Louisiana State Museum.

Originally from Boston, Kunian made his way to New Orleans after graduating from Columbia University.

“If you’re going to appreciate New Orleans culture, you have to know the way jazz was developed in this town.”

“I try to juxtapose the music to see how it all works together,” said Kunian, who earned a master’s degree in music from the Tulane School of Liberal Arts in 2013.

In his new role as music curator, Kunian is tasked with the challenge of maintaining the Louisiana State Museum’s massive collection of musical artifacts. Ranging from filing cabinets filled with sheet music to a piano recovered from Fats Domino’s Hurricane Katrina ravaged home, the items are currently housed at the Old U.S. Mint.

Kunian also plans to showcase the collection while launching the New Orleans Jazz Museum, which is projected to open on the Mint’s second floor during festivities celebrating the city’s Tricentennial.

“Visitors will be able to trace the history of jazz in New Orleans from its roots in ragtime, opera and Creole music up through Louis Armstrong, King Oliver and its revival,” said Kunian.

Kunian hopes to include an exhibit covering jazz music from around the world.

“People think of it as art music, but it’s dance and social music as well. If you’re going to appreciate New Orleans culture, you have to know the way jazz was developed in this town. It’s part of our lives, whether you own a record or not,” said Kunian.