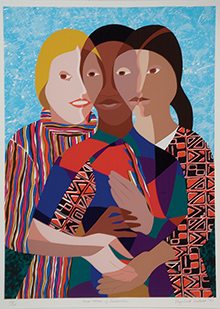 Three Women of America by Elizabeth Catlett (1915-2012) is a 30-inch-by-24-inch serigraph that depicts the overlapping of three women of different ethnicities—white, black and Hispanic. The serigraph, purchased from Catlett in 1990 by the Amistad Research Center at Tulane University for its permanent collection, features bold colors and patterns that aid in emphasizing the similarities of the women pictured as opposed to their differences.

The spectrum of skin tones ranges from pale to dark, and each face shares an eye with the next. Each woman’s eyes are of the same color and shape. Their hands are intertwined in a way that makes it difficult to tell who each limb belongs to. They are one.

A common characteristic among the work of feminist artists has been the use of the female body and sexuality to promote female strength and power. Instead of sexuality, in Three Women of America, Catlett shows the women in an embrace that exudes a maternal warmth.

In addition to paints and printmaking, Catlett was a gifted sculptor.

In “The Sculpture of Elizabeth Catlett,” art curator Jeff Harrison wrote: “Throughout her career, Catlett has been a political progressive committed to improving the lives of African-American and Mexican women, and she has often used her art explicitly to advance their cause.”

Born to parents who both worked in schools, Catlett, who is African-American, also made education part of her life. She earned a bachelor’s degree from Howard University and a master of fine arts degree from the University of Iowa. She later taught high school and college students in Durham, North Carolina; New York City; New Orleans; and Mexico City, Mexico.

She moved to Mexico in the late 1950s, where she continued her passion for activism. According to her April 2012 obituary in The New York Times, she was arrested during a railroad workers strike in Mexico City and eventually “gave up her American citizenship and was declared an undesirable alien by the State Department.”

She died at age 96 at her home in Cuernavaca, Mexico.

Although women were the focus of many of Catlett’s pieces, her work was also known for highlighting the black experience in America—male and female—and for representing the lives of all working class men and women.

This article first appeared in the September 2016 issue of Tulane magazine.