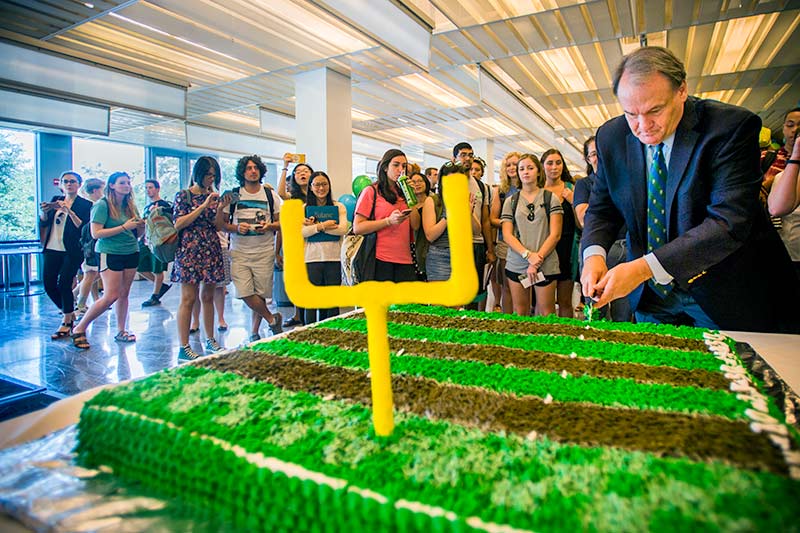 The Big Splash, a “Food-for-All” event to celebrate the reopening, offered samples, cake, entertainment and more for the students, faculty and staff who attended. WGNO’s “News with a Twist” reporter “Wild Bill” Wood introduced President Michael Fitts, who gave a rousing speech in front of a 32-square-foot Angry Wave logo.

“This new food court…sets the standard for food courts across the United States,” he said, commenting on New Orleanians’ incredible love for food and music. President Fitts then cut a green ribbon (with assistance from Riptide the Pelican) to officially reopen the venue before handing out slices of a massive football-field-shaped cake.

“This new food court…sets the standard for food courts across the United States."

“We are excited for the newly renovated food court here in the LBC: We are catering to the students with great new flavors, a variety of choices and a willingness to change things up,” said Michelle Gall, marketing manager for Tulane Dining Services.

“It is important to have these culinary offerings and representations here,” added Mai Pham, chef/founder of pan-Asian-themed Star Ginger, one of four new vendors, citing the appeal of New Orleans as a great city for food and the desire to contribute to Tulane’s diverse student population. Six of the previous vendors are still serving at the food court.

The event also included a DJ and a prize wheel for a chance to win unique gifts and apparel.