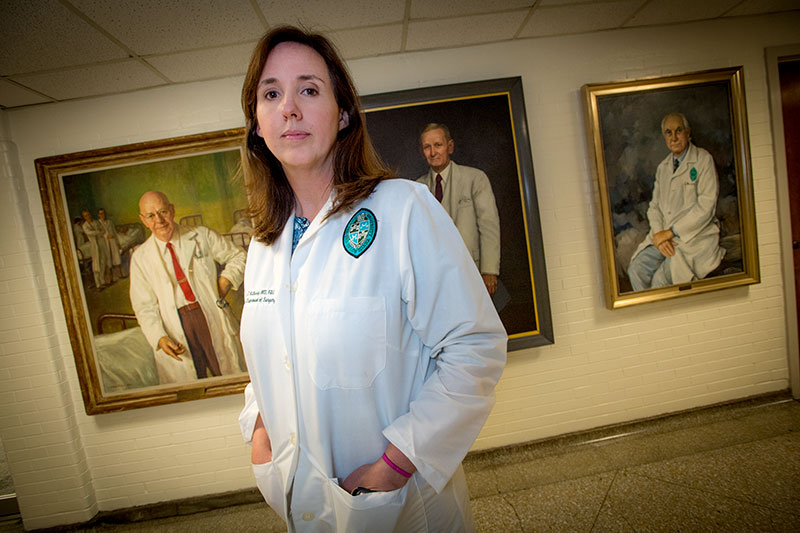 Dr. Mary T. Killackey is the newly appointed chair of the Department of Surgery. (Photo by Paula Burch-Celentano)

Appointed by senior vice president and dean Dr. L. Lee Hamm III in May 2016, Dr. Mary T. Killackey is making history at the Tulane University School of Medicine as the first woman to be chair of the Department of Surgery.

“I’m about 10 to 15 years younger than the average chair,” said Killackey, who is an associate professor of clinical surgery.

After graduating from the College of Physicians and Surgeons at Columbia University and completing her general surgery residency at Strong Memorial Hospital at the University of Rochester, Killackey finished the Abdominal Organ Transplant Fellowship at Mount Sinai Medical Center in New York in 2005.

“It was a point in my life where I just thought, ‘If I do this, I’ll never regret it; it’s going to be a life-defining change.’”

— Dr. Mary T. Killackey, chair of the Department of Surgery at the Tulane University School of Medicine

During the fellowship, she met Dr. Sander S. Florman, a previous graduate of Mount Sinai’s program, who eventually approached her with the idea of moving to New Orleans in order to be a part of the city’s post-Katrina recovery.

“He called me up after Katrina and said, ‘Tulane is reopening; do you want to come down?’” Killackey said. “It was a point in my life where I just thought, ‘If I do this, I’ll never regret it; it’s going to be a life-defining change.’”

Killackey has worked as a transplant surgeon for the past 10 years.

“I very much like technical surgery, and vascular surgery and transplant allows for that,” she said.

In her new role as chair, Killackey plans to implement leadership development opportunities and explore collaborations between different disciplines and schools while upholding the department’s central objectives of education, research and clinical work.

“I see so much possibility, and I’m very excited. My initial goal is to set the expectation of professionalism and respect in our workplace, but we want it to be joyful. I want people to want to come to work here,” Killackey said.