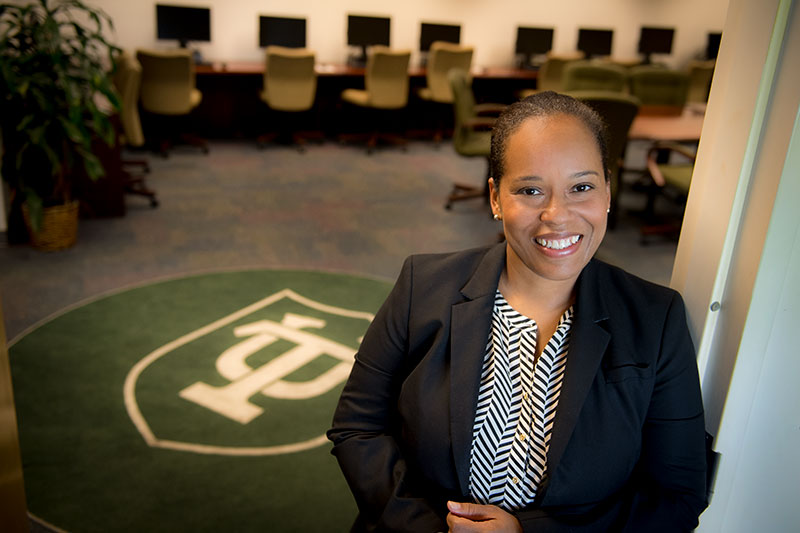 During her career, Diplomat in Residence Kali Jones has lived and worked all over the world including Madagascar, Vietnam, Haiti and Brazil. (Photo by Paula Burch-Celentano)

For the first time in nearly a decade, Tulane University is among 16 selected universities in the country to host a Diplomat in Residence. The program left Tulane in 2007 because of budget constraints within the U.S. Department of State.

Tulane University’s appointed diplomat is Kali Jones, a New Orleans native and a 1996 graduate of the dual degree JD/MSPH program from the Tulane Law School and the School of Public Health and Tropical Medicine.

Although housed at Tulane, Jones’ duties will expand beyond the reach of campus.

“Decisions we make domestically have an impact internationally, and I want young people to consider America’s role in the world, and how we all can contribute to a better global community.”

“As the Diplomat in Residence for the Central South region, I will collaborate with high schools, universities and professional associations in Louisiana, Arkansas and Mississippi to heighten awareness of the incredible career opportunities presented by the Department of State,” said Jones.

Amjad Ayoubi, senior associate dean of Newcomb-Tulane College, said the Department of State continued its relationship with the university even though the department suspended the in-house diplomat position almost a decade ago.

Ayoubi served as a lead advocate for its return and made a request in 2014 to reinstate it on campus. This process, he said, included outlining the university’s commitment to the Department of State and pointing out the fact that Tulane is among the top providers of qualified students to the department.

“We are so lucky to have Kali join us because in most cases the Diplomat in Residence is not an alum of the university,” said Ayoubi. “It is wonderful to have someone who is highly engaged with students and who has a special connection to the university.”

A faculty welcome reception for Jones will be held on Tuesday (Oct. 18) from 4 to 6 p.m. in the 1834 Club in the Lavin-Bernick Center (LBC). An RSVP is requested. Students interested in meeting Jones can attend an information session on Thursday (Oct. 20) at 5:30 p.m. in the LBC.