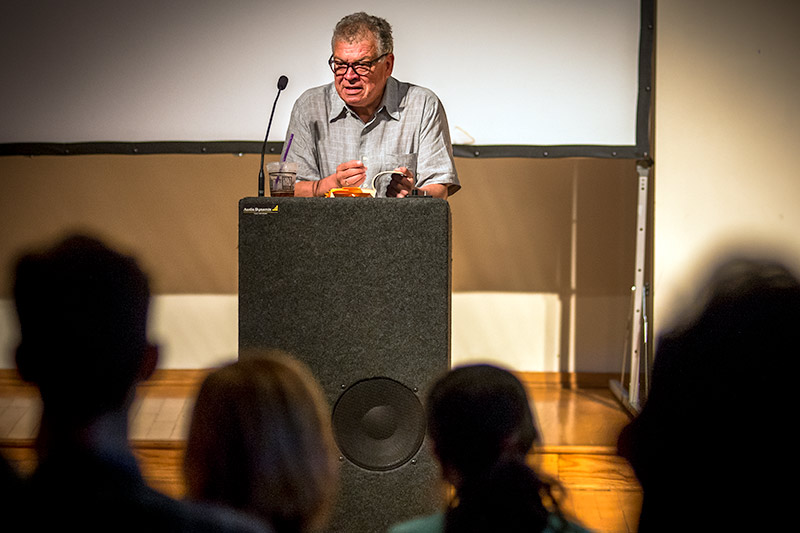 Francisco Goldman explains how life in Guatemala influenced his writing during a lecture this week on the Tulane University uptown campus. (Photo by Sally Asher)

Author and professor Francisco Goldman spoke about the Guatemalan political murder that started a new era of organized crime in Latin America Tuesday (Oct. 18) on the uptown campus of Tulane University.

As part of this year’s Forum Tulane series, whose theme is “power,” and in line with the events of International Education Week, Goldman spoke exclusively about The Art of Political Murder, his nonfiction work about the murder of Bishop Juan Gerardi Conedera, a Roman Catholic human rights activist, in Guatemala City.

Bishop Gerardi was killed two days after releasing the Guatemala: Nunca Mas report, in which he detailed the Guatemalan government’s culpability for 93 percent of the deaths of more than 200,000 people—many indigenous and poor—during the country’s 40-year civil war. Goldman became interested in investigating the 1998 murder as he observed the reactions of the people and of the Guatemalan military elite from afar. His initial interest led to an intensive, often dangerous investigation of the case for nine years, culminating in the publication of his book.

“This case transformed the way that people thought about fighting crime in Latin America,” said Goldman. Though Gerardi’s court case was the first to try and later convict members of the Guatemalan military elite in a civilian court, Goldman argues that it marked a power transition for the military elite, in which they shifted their focus to the narcotics trafficking and organized crime that has come to define Central America in the past decade.

Born to a Guatemalan mother and a Jewish father in Massachusetts, Goldman spent much of his youth in Guatemala, which later influenced his decision to begin writing about Central American civil wars and political unrest during his journalism career and in his novels.