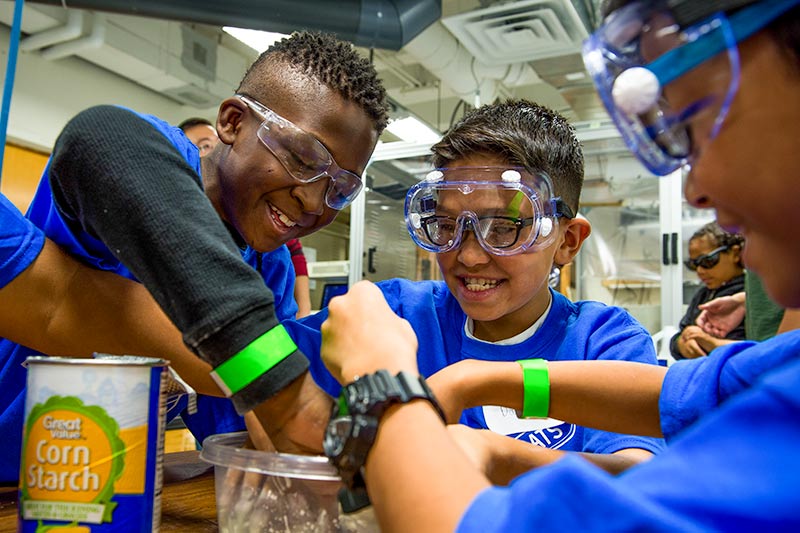 The Fluids, Bubbles and Slime portion of the STEM workshop at the Boys At Tulane in STEM (BATS) workshop is taught by Physics professor Diyar Talbayev in Stern Hall. To make the slime, the students created a mixture of cornstarch and water. (Photo by Sally Asher)

The Tulane University School of Science and Engineering exposed 70 middle school boys to the wonders of science, technology, engineering and mathematics at the inaugural Boys At Tulane in STEM (BATS) workshop on Saturday (Oct. 22).

“We started BATS because our Girls in STEM at Tulane (GiST) program has been very successful over the last four years,” said Michelle Sanchez, director of the Center for K-12 STEM Education. “Because we only charge a small fee, two-thirds of the students that have participated in GiST are from public schools and two-thirds are minority. We expect to reach the same population for BATS.”

The program is designed to support students who have little exposure to science in school and to inspire them to pursue careers in science, technology, engineering and math (STEM).

During the one-day workshop, Tulane faculty and students offered a variety of interactive activities that allowed participants to hold scorpions, pilot LEGO robots, work with electrical circuits and test the oxygen content of water.

“We wanted to teach the kids about what we do on a daily basis,” said Robinson, “that is using engineering to make everybody’s lives easier.”

One workshop introduced students to the human brain, using electrical circuits that allowed one student to control the muscles in another student’s arm. Next, the boys examined the brains and spinal cords of humans, rats and other animals.

The ultimate goal of the event was to expose students to a new level of learning while allowing them to witness the equal status that STEM affords men and women.