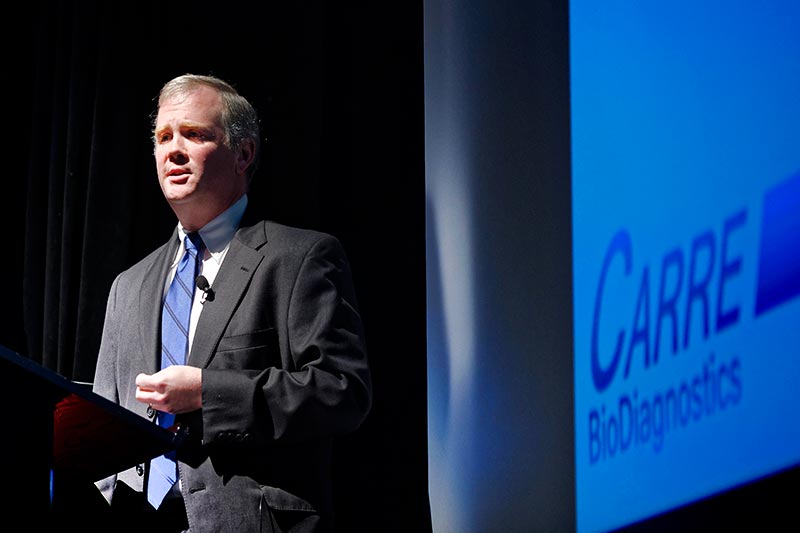 Cooper Woods presents his pitch at the BioChallenge competition. (Photo by Frank Aymami)

A new company launched by a Tulane School of Medicine researcher took home an investment prize at the 5th Annual BioChallenge Startup Competition. Cooper Woods, assistant professor in the Department of Physiology and the Tulane University Heart & Vascular Institute, won for his startup, Carre Diagnostics.

Woods and his team are working on a test to identify chronic kidney disease patients with coronary artery disease who are more likely to suffer heart attacks. The simple diagnostic blood test looks for elevated levels of a protein called bone morphogenetic protein 4, which Woods found to be an indicator of increased heart attack risk.

“Twenty-six million people in the United States have chronic kidney disease,” Woods says. “We need to a tool to identify those who would benefit from preventative therapies, such as statins.”

“Winning the BioFund prize gets our foot in the door with a lot of potential investors."

As part of the BioChallenge startup competition, Woods developed a business plan and model for getting the test on the market. He presented his pitch in front of a panel of judges that included former challenge winners and potential investors. Woods won a $25,000 investment prize from the New Orleans BioFund.

The BioChallenge is a startup competition hosted by the New Orleans BioInnovation Center for new bioscience companies in Louisiana.  The competition offers entrepreneurs the chance to pitch their ideas for a shot at feedback and critical capital to fund growth and hiring.

“We’ve been working closely with the BioInnovation Center on enhancing our understanding of the marketplace,” says Woods. “Winning the BioFund prize gets our foot in the door with a lot of potential investors.  We are now looking to build on this momentum as we take our next steps towards the market.”

This is the third year in a row a Tulane University researcher has been recognized at the BioChallenge competition. BioAesthetics, a startup launched by doctoral candidate Nicholas Pashos took home the grand prize in 2015. Associate professor Michael J. Moore and doctoral candidate Lowry Curly won in 2014 for their company, AxoSim Technologies.

Woods hopes to begin clinical trials on his test sometime next year and get it onto the market in 2019.