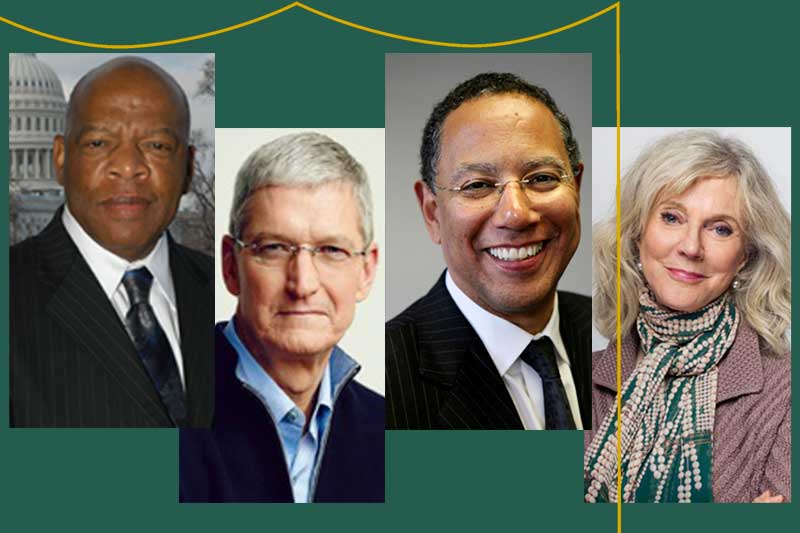 “These individuals embody and exemplify Tulane’s values of achievement, innovation and compassion,” Tulane President Mike Fitts said. “They inspire us all by having attained the greatest success in their chosen fields while enriching and empowering the lives of others.”

As CEO and a member of Apple’s board of directors, Cook has overseen the introduction of some of the world’s most innovative products and services. He has also championed inclusion and diversity at Apple, investing in educational opportunities for students of all ages and backgrounds, and ensuring Apple offices and stores are open and welcoming to everyone. Under his leadership, Apple achieved an environmental milestone: powering its global facilities with 100 percent renewable energy. In the seven years since Cook became CEO, Apple initiated a program to match employee donations, has given millions of dollars to the American Red Cross and other nongovernmental organizations, and has become the largest corporate donor to (RED), a nonprofit organization that partners with iconic brands to raise money to fight HIV/AIDS in Africa. Cook, who will receive an honorary doctor of letters and deliver the keynote address at this year’s Commencement, has received numerous honors, including the Newseum’s Free Speech Award and the Southern Christian Leadership Conference’s Keeper of the Dream Award for Human Rights.

“These individuals embody and exemplify Tulane’s values of achievement, innovation and compassion."

Baquet, who will receive an honorary doctor of letters, has served as executive editor of The New York Times, the highest ranked position in the newsroom, since 2014. Prior to that he served as managing editor of the paper and as its Washington bureau chief from 2007 to 2011. He held several other newsroom positions at the paper, as well. Baquet left The New York Times for several years to work at the Los Angeles Times, where he served as managing editor and editor. A native of New Orleans’ historic Treme neighborhood and a graduate of St. Augustine High School, Baquet landed his first job as a journalist  with his hometown paper The Times-Picayune. He also worked for The Chicago Tribune, where he served as associate metro editor for investigations and chief investigative reporter. He won a Pulitzer Prize in 1988 when he led a team of three in documenting corruption on the Chicago City Council. He was also a finalist for a Pulitzer Prize in 1994 in the investigative reporting category and has won numerous other national and regional awards, including the Peter Lisagor Award for investigative reporting.

Danner won a Tony Award for her Broadway debut in Butterflies Are Free. She received nominations for her roles in A Streetcar Named Desire, Betrayal and Follies. She was awarded two Emmys for Showtime’s Huff and two nominations for her role in Will & Grace. Her films include the Meet the Parents franchise, The Great Santini and The Prince of Tides, as well as many others. She serves on the board of advocates for environmental groups including Environmental Advocates, Union of Concerned Scientists and the Environmental Media Association, and promotes awareness of oral cancer, to which her husband, Bruce Paltrow, a Tulane graduate, succumbed, through the Bruce Paltrow Fund at oralcancerfoundation.org.

Lewis, who will receive a doctor of humane letters, gained nationwide acclaim as one of the Big Six leaders of the Civil Rights Movement. The group, which included Martin Luther King Jr., was instrumental in organizing the March on Washington in 1963 during which King delivered his famous “I Have a Dream” speech. Lewis was also one of the original Freedom Riders who traveled on interstate buses to challenge segregation across the South. As chairman of the Student Nonviolent Coordinating Committee, Lewis helped spearhead the march against violence on the Edmund Pettus Bridge in Selma, Alabama in 1965. The march, in which Lewis was severely beaten and arrested, was a seminal moment in the Civil Rights Movement and came to be known as “Bloody Sunday.” Lewis continued to dedicate his life to civil rights, including voter registration. In 1977, President Jimmy Carter appointed him as associate director of ACTION, the federal agency that included the Peace Corps and Volunteers in Service to America. In 1981, he was elected to the Atlanta City Council, and in 1986 to the U.S. House of Representatives, where he has represented Georgia’s 5th congressional district for the past 33 years. Lewis has received the Martin Luther King Jr. Nonviolent Peace Prize, the John F. Kennedy Profile in Courage Award, the NAACP’s Spingarn Medal and the Presidential Medal of Freedom.