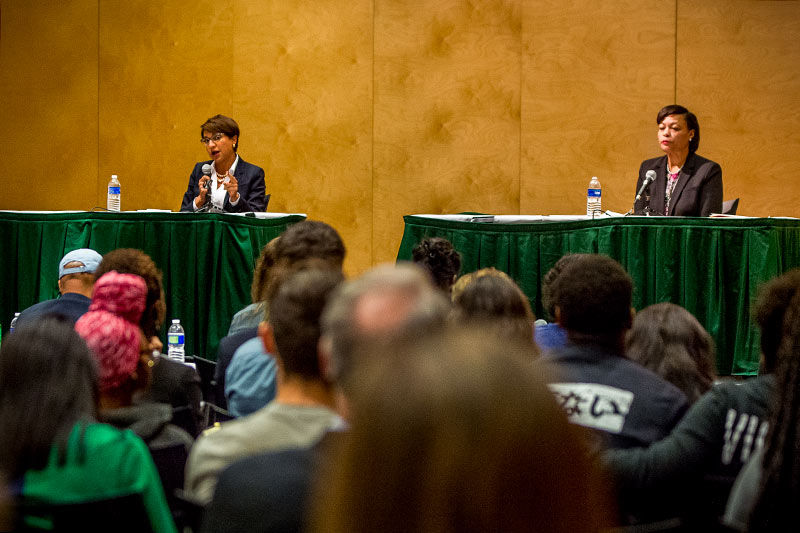 Heading into the Nov. 18 runoff election for the next mayor of New Orleans, LaToya Cantrell has a 20-point lead over opponent Desiree Charbonnet, according to a newly released Tulane University poll.

The poll of 483 Orleans Parish residents who have voted or plan to vote in Saturday’s election found that 50 percent back Cantrell while 30 percent support Charbonnet. Nearly 20 percent of respondents are still undecided, according to poll authors Mirya Holman and J. Celeste Lay, associate professors of political science.

The poll margin of error is ± 5 percent, based on turnout in the primary election.

“A large proportion of voters appear to be voting against the other candidate,” Lay said. “Twenty-four percent of Cantrell’s voters and 27 percent of Charbonnet’s supporters say they are voting for their candidate because they don’t like or don’t trust the opposing candidate.”

Cantrell also benefits from her city council experience: Just over a quarter (26 percent) of her supporters say they are voting for her because she did a good job on the city council. One in three of Charbonnet’s voters are picking her because she has the best policy ideas.

As in the primary, Cantrell’s support crosses racial groups. Nearly 50 percent of African American respondents and 47 percent of whites say they are voting for Cantrell. Men and women in the sample are equally likely to support Cantrell.

When asked to evaluate the candidates on a variety of traits, voters see the candidates as very similar overall. Cantrell was evaluated slightly more positively on many traits than was Charbonnet, including being well-connected and caring.

Respondents rated Charbonnet higher in “bought out by business interests.”

“The coordinated negative campaign against Charbonnet appears to have successfully created suspicion around her,” Holman said. “We see little evidence that Cantrell’s alleged credit card discrepancies damaged her campaign. Indeed, Charbonnet’s perceived role in their release may have backfired.”

The survey was conducted online and distributed through Focus Group Testing LLC from Nov. 3-13. The firm’s database consists of 2,445 Orleans Parish residents who were all invited to take the survey.