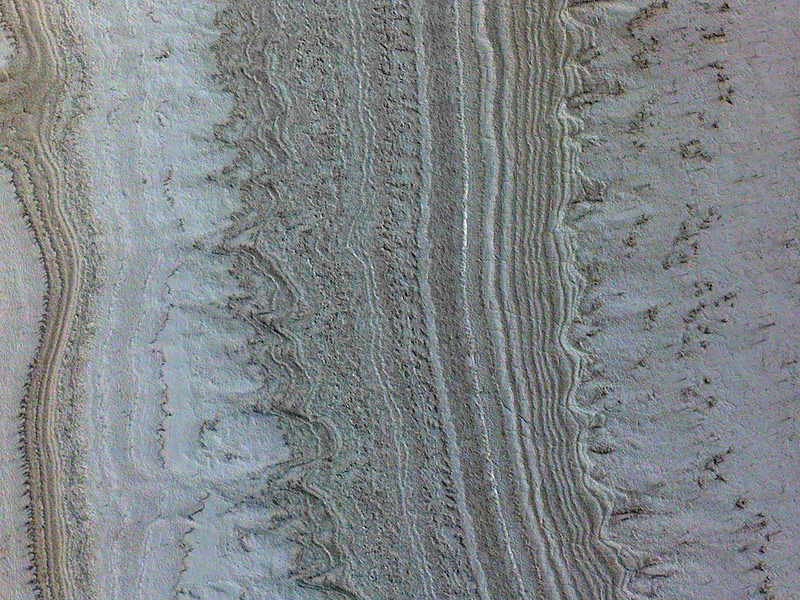 This image taken by NASA’s Mars Reconnaissance Orbiter shows ice sheets at Mars’ south pole. The spacecraft detected clays near this ice; scientists have proposed such clays are the source of radar reflections that have been previously interpreted as liquid water. (Photo courtesy of NASA/JPL-Caltech/University of Arizona/JHU)

A Tulane University planetary scientist is part of a team of North American scientists putting to rest a theory that water lies under the south polar cap of Mars.

The study, led by York University in Toronto and published in Geophysical Research Letters, appears to show that for the first time another material  — a form of clay called smectites — is being attributed to the bright radar reflections that many scientists have for years believed to be water.

Jennifer Whitten, a planetary scientist in the Tulane Department of Earth and Environmental Sciences, was part of the team along with scientists from the University of Arizona, Cornell University and Purdue University. The study was led by Isaac Smith, an assistant professor of earth and space science in the Lassonde School of Engineering at York University.

“I think this study presents a viable alternative and I can't wait to see how it is received by the planetary science community."

The science community has long been skeptical of the water theory, specifically that a lake or any other body of water, existed at the bottom of the Mars polar cap, Smith said. “Recent publications questioned if it was even possible to have liquid water,” he said.

The research team used experimental and modelling work to demonstrate that smectites can better explain the radar observations made by the MARSIS (Mars Advanced Radar for Subsurface and Ionosphere Sounding)  instrument aboard the European Space Agency’s Mars Express orbiter. Further, they found spectral evidence that smectites are present at the edges of the south polar cap.

Smectites are a class of clay that is formed when basalt, the volcanic rock that comprises most of Mars’ surface, breaks down chemically in the presence of liquid water.

Researchers at York measured the radar characteristics of hydrated smectites at room temperature and cryogenic temperatures. The questionable radar characteristics are two numbers that represent the real and imaginary parts of the dielectric constant. Both numbers are important for fully characterizing a material, but a 2018 study used modelling that included only the real part of the dielectric value, leaving out certain classes of materials from being considered – namely clays.

Once the experimental measurements were completed, the data were evaluated using code. It was in these simulations researchers found that frozen clays have numbers big enough to make the reflections.

For her part, Whitten analyzed the MARSIS radar data and identified observations with high power values at the base of the south polar layered deposits, both in the assumed lake region and elsewhere.

“In the past few years, there have been a couple of studies that interpreted radar data to indicate that there are liquid water lakes underneath the ice cap at the south pole of Mars,” Whitten said. “If true, that is revolutionary for our understanding of Martian habitability. So, we decided to test that hypothesis.”

MARSIS is a radar sounder instrument similar to a ground-penetrating radar instrument, where energy at microwave wavelengths is sent toward the surface. The instrument then “listens” for the returned signal. The strength of that signal depends on the materials it interacts with and travels through, such as air, water, ice and rock.

“Liquid water is very good at reflecting energy, so the presence of a lake could be one scenario that produces a strong signal in MARSIS data,” Whitten said. “Our paper explores other scenarios that could produce that same signal and concludes that the presence of clays below the ice cap is more likely given the conditions on Mars today.

“I think this study presents a viable alternative and I can't wait to see how it is received by the planetary science community,” she said. “It is exciting to be part of such an active discussion where different groups are rapidly publishing papers about the topic.”