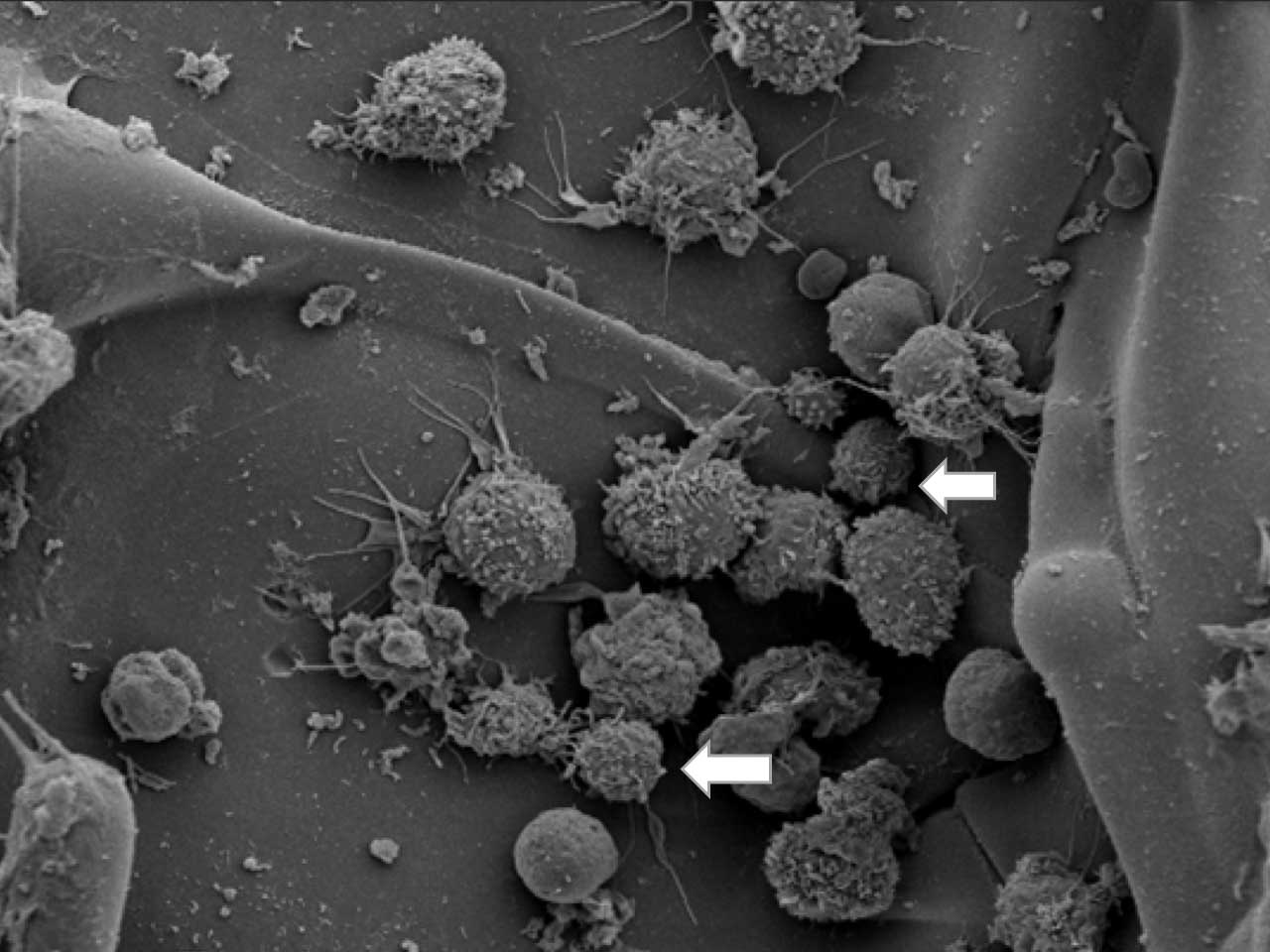 Adult stem cells (indicated by the white arrows) show promise in treating a variety of conditions, according to research by Dr. Eckhard Alt of the School of Medicine. These cells were obtained from adult adipose, or fat tissue. (Photo provided by Dr. Eckhard Alt)

Could naturally occurring stem cells throughout the body hold the key to unlocking the next generation of advances in regenerative medicine?

Absolutely, according to Tulane University Professor of Medicine Dr. Eckhard Alt, who recently published a perspective in the journal Cells that outlines how a type of adult stem cell holds tremendous promise to fuel advances in treating everything from knee joint restoration to helping paraplegics regain mobility after severe spinal cord injuries.

The article provides strong evidence supporting the existence of a small, vascular-associated, pluripotent stem cell type (vaPS cells) that is ubiquitously distributed throughout all organs of the adult body. Pluripotent stem cells can transform into any type of cell.

“After many years of basic research, I'm now impressed every day how much we can help patients with these stem cells,” Alt said.

The publication is based on two decades of research by Alt, director of cardiovascular research at Tulane University School of Medicine, and by his colleagues, who conducted the work at Tulane, MD Anderson Cancer Center/University of Texas, Methodist Research Center in Houston, Sanford Health University of South Dakota, and the IsarKlinikum in Munich, Germany.

Therapies involving the pluripotent stem cells include treating osteoarthritis of joints, chronic back pain, ruptured tendons and nonhealing wounds. Some of these indications are currently being evaluated in the United States by three FDA-approved trials. Celebrity golfer Jack Nicklaus has successfully received therapies with these cells in Europe, lending some star power to Alt’s research.

vaPS cells are associated with blood vessels and can therefore be found in every tissue and organ in the body. Alt extracts these cells from adipose (fat) tissue taken from the patient using a mini-liposuction procedure.

“We choose to extract the cells from adipose tissue because it has a high stem cell concentration, is easy to access and most patients are fine getting rid of some,” said Alt. After processing for one hour, the recovered regenerative cells are washed and separated from remaining connective or fat tissue and can be reintroduced into the body at a different site, without need for further culturing or manipulation, all within one intervention. As such, “a broad range of indications can be treated on site, including tendon ruptures, osteoarthritis, cartilage defects in joints, chronic lower back pain due to facet joint syndrome, non-healing wounds, or bone damage.

“Embryonic cells have a mind and plan of their own — they already know what they want to be in future life, because no microenvironment exists for them yet, which could teach and guide their differentiation. In embryonic cells, guidance comes intrinsically. In adult stem cells, this intrinsic guidance is missing. The local microenvironment guides the fate and differentiation of the stem cell. First, these stem cells respectively mature to progenitor cells, and then to fully differentiated adult somatic cells,” Alt said.

That means the differentiation of vaPS cells solely depends on external guidance by signals released from the microenvironment where the cells are located. That makes this therapy so universal and safe, he said.

These vaPS cells have an advantage over embryonic stem cells as they are naturally directed to adapt to the respective microenvironment where they are transferred. The vaPS cells don’t have the problem of being rejected, as allogenic embryonic cells have, when they differentiate to adult somatic cells.

“Aside from making the stem cell therapy with these adult vaPS cells safe and widely available to many patients in need for regeneration – such as for repair of joints, tendons, skin or other aging associated diseases,” one big hope for Alt is to even help people with paralyzed limbs regain mobility. What the researchers learned is that under certain conditions these cells are able to build new neural structures, “enabling even paraplegics in some cases to walk again, swim or move in other ways.”

Another of Alt’s dreams is to one day treat a patient with pacemaker cells derived from the patient’s own stem cells, instead of implanting an artificial pacemaker, Alt added. 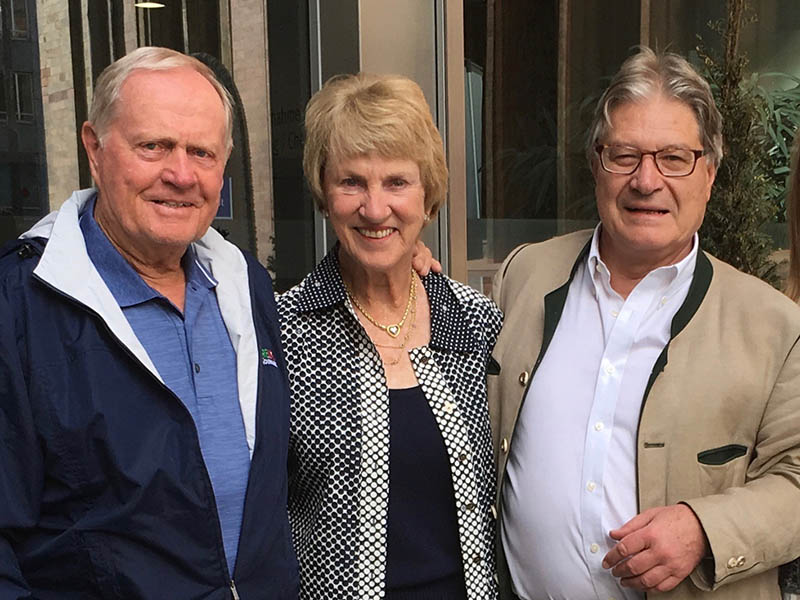 Dr. Eckhard Alt, right, with former patient and golfer Jack Nicklaus, along with his wife, Barbara, in front of the Isarklinikum in Munich, Germany. Nicklaus has received treatments with adult stem cells in Europe. (Photo provided by Dr. Eckhard Alt)